It has been a month straight from hell. Making and giving semester-end tests, now grading, with a PhD deadline looming over my head in 10 days and smouldering homefires. I expect to crank out a few more posts and (gasp!) actually get out to a game soonish, so hopefully that will take the pressure off.

Here's a little bauble to get me back in the groove and shake up your Japan-themed game. 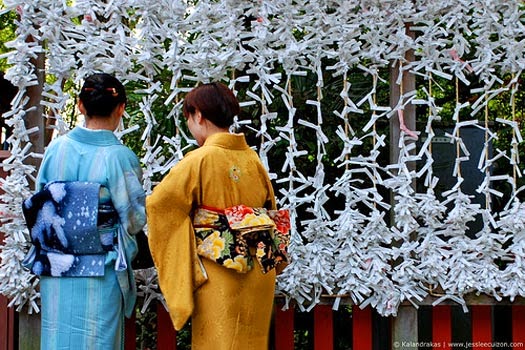 Every shrine and temple in Japan sells ‘omikuji’, fortunes or predictions written on pieces of sacred paper. You go to the temple wicket, pay a coin, then a monk hands you a carved wood cylinder with a pinhole at the top. You give the cylinder a good shake, then turn it upside down until one metal rod of the many inside slides out of the pinhole. The rod has markings on it, which the monk inspects, then he turns to a great cabinet of boxes behind him, opens the appropriate drawer, and hands you the rolled up omikuji. After reading your omikuji, tie it to a tree or line strung between trees on the temple grounds and pray that it either comes true if good, or that it doesn’t affect you too much if bad.

The omikuji first explains your general luck, with each level giving a different effect for the remainder of the day, session, or adventure as the DM sees fit. The following are suggestions, and DMs should feel free to tailor the bonuses or penalties to match the game as they run it. 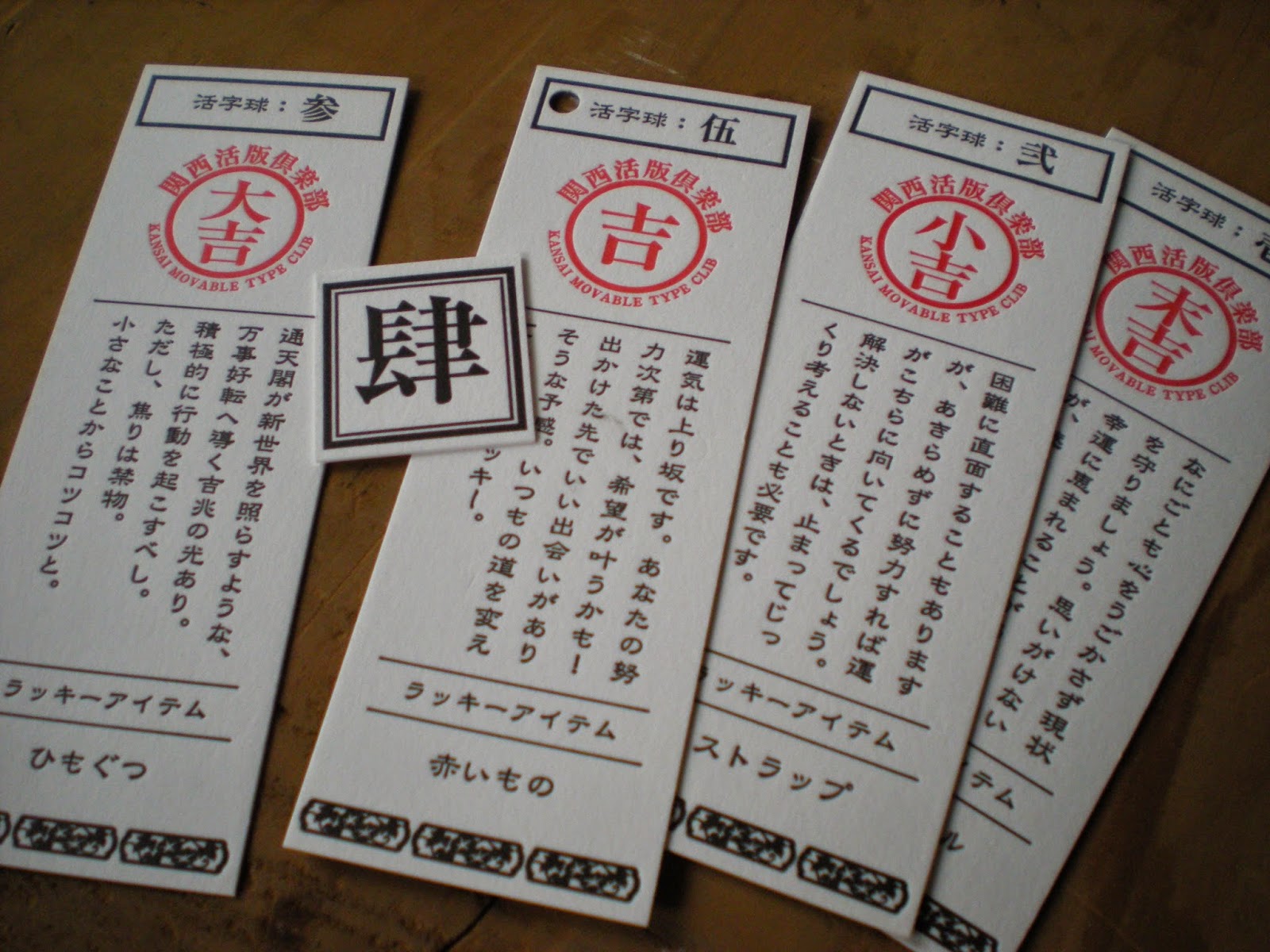 3 大吉 - Daikichi - Excellent luck (Immediately go gamble and buy lottery tickets)
The character rolls two dice for all rolls and takes the best result. The character can also have one Save vs. Death against a normally unavoidable misfortune. Alternately, one ‘lucky’ thing may happen to further the plot of the adventure.

4 小吉 - Syokichi - A little luck
The character gets + 1d4 to one roll type of his choice. Examples include attack, damage, saves, or skill rolls.

5-6 半吉 - Hankichi - Semi-good luck
The character gets + 1 to a roll of her choice. Examples include an attack, one weapon damage, one type of save, OR a certain skill roll.

7-8 末吉 - Suekichi - Uncertain luck
The character can reroll one failure, but does not have to take the new roll.

9-10 末小吉 - Suekokichi - Uncertain but a little luck
The character can reroll one failure, but has to take the new roll.

11-12 凶 - Kyou - Bad luck (Misfortune)
The character gets – 1d4 to a roll chosen randomly. Examples include an attack, one weapon damage, one type of save, OR a certain skill roll.

18 大凶 - Daikyou - Certain disaster (consider buying a karmic life insurance policy)
The character rolls two dice for any rolls and takes the worst result. The character must also make one Save vs. Death to avoid one random dangerous or deadly event. Alternately, one ‘jinxed’ thing may happen to obstruct or derail the plot of the adventure. Besides general luck, an omikuji also gives you a specific detail of your fortune. Note that good effects apply only to the owner of a good omikuji, while bad apply to the ENTIRE party in addition to the owner. This will result in the character being called a厄病神Yakubyoukami (jinx or literally Plague God) and sometimes shunned or chased from the group until their luck turns.

1 方角 - Hougaku – Direction
If good, the character may never be lost. If bad, they move in a random direction until the omikuji wears off.

2 失物 - Shitsubutsu - Lost Things (いでがたし)
If good, the character may find an item they need at just the right moment. If bad, they will lose an important item exactly when they need it most.

3 緑談 – Endan -  Love  Marriage
If good, the character will encounter someone who would be a good mate or spouse for them. If bad, they will be the focus of attention for an obsessive and annoying suitor.

4 旅立 - Tabidashi - Starting a trip
If good, the character may arrive at their destination without random encounters or other traveling misfortune. If bad, they will have such encounters and detours at every opportunity.

5 商売 - Shobai - Business
If good, the character will have a bonus when selling items and a discount buying them, plus have access to just about anything they want. If bad, they will find what little items available either at insane prices or far beyond their means.

6 待人 - Machihito - Waiting for person
If good, the character will meet an NPC who can help them achieve their goal. If bad, they will either be unable to meet the person they seek or encounter a scoundrel who keeps them from their objective.

7 病気 - Byouki - Illness
If good, the character will have a bonus to resist the effects of disease, including those that usually do not offer saves. If bad, they inevitably catch whatever is going around.

8 建家 - Tateya - Building
If good, the character will have a bonus to find architectural secrets, or avoid traps. If bad, they will not find the former and inevitably trip the latter.

9 勝負事 - Shoubugoto - Gambling Luck (Gonna lose)
If good, the character may gamble with no or little chance of losing. If bad, they will certainly lose, and to a large degree.

10 学習 – Gakushu – Study.
If good, the character may get a bonus to experience or skill improvement rolls. If bad, they get a penalty.
Posted by Tedankhamen at 8:14 AM No comments:


Remember the OSR when it started?
When it was nameless?
When you copied and pasted every cool idea or table because you’d be afraid it’d all disappear?
When there were a few cobbled together D&D hacks but no true retro-clones yet?
When the Society of Torch, Pole, and Rope or Chogwiz were your daily reads?
Before anybody had made a dime off the thing?
When people who disliked 4e were considered lame or behind the times?
When rpg.net was still readable?
Before Pathfinder existed?
When Gary and Dave were still alive?
When people wrote as much about Traveler or Stormbringer or GURPS as they did about D&D?
When people fretted about the OGL and what WotC would do?
Not saying anything is better or worse, just remembering a time, like an old fragrance that is lost.
Is it too early to be nostalgic about a movement based on nostalgia?
Posted by Tedankhamen at 7:43 AM 6 comments: 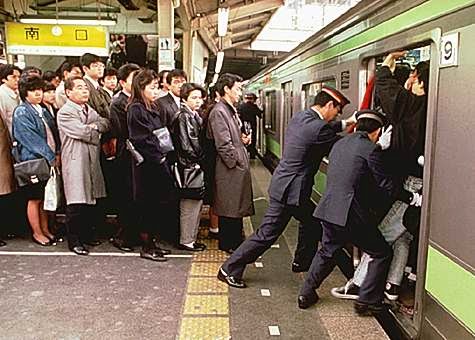 Downloaded it, haven’t read it. May never considering my lifestyle, or may get to it when degree ends/new job is found/child goes to college/7e comes out. It joins the untouched treasures on  my hard drive. This post is merely for traffic and contains little news, just some late night mumblings followed by futon crash for a few hours before 6am Japanese train rush hour.

Lots of internet stink about this thing. Goes both ways:

HOORAH!!
The big corporate gaming monster listened to the OSR and dialed back from 4e, then gave it out free!

BOO!!
The big corporate gaming monster has mesmerized the OSR with its own tricks, and the ‘game’ is incomplete. (I know about the updates, just stating current events)

HOORAH!!
WotC put in an ohmyglob actual reference to LGBT gamers and ushered in an era of explicit gender issue acceptance in gaming. Having seen LGBT friends go through the shitty wringer our society puts them through, this makes me more interested in 5e than I would have been otherwise.

BOO!!
Homophobe trolls are beating collective chest about ‘gayed up’ game (see response to AiCN’s review for typical example), which essentially amounts to a choice that gaming groups have been making for 40 years. Anonymous douchenozzle bigots are getting far more attention than they deserve.

BOO!!
Some internet meanies have taken the opportunity to beat up on Zak S, who consulted on 5e, and has the very LA habit of speaking his mind in the most confrontational/condescending way possible.

HOORAH!!
Half the OSR has rushed to his defense, ironic for a pundit who doesn’t particularly need it.

HOORAH!!
Hopefully the impending success of 5e will breathe life into some other old games the deserve a major revival.

Oyasumi nasai.
Posted by Tedankhamen at 8:25 AM 4 comments:

1.        The sound of demon bagpipes resonating in the hills with no discernible source of origin.
2.        Trappist monks with vows of silence and obscure plans
3.        A French demoiselle in distress who is actually a Prussian spy with designs
4.        Historical preservation societies who don’t know much about history
5.        A letter from the foe telling you to drop the investigation
6.        Foggy nights on a loch in a rowboat
7.        A fake monster built to take attention away from the real abomination
8.        The appearance of the Queen and retinue
9.        A disappeared scientific expert you must find
10.    Silent folk with physical oddities masquerading as other than they are
11.    Locals always with a story of what truly happened that only muddy the waters further
12.    A silent clansman in kilt who scares you off with two growling mastiffs on chains
13.    A Scotsman with a loaded pistol in his sporran
14.    Children who throw rocks
15.    Dead or deranged animals who tip you off to what is really happening
16.    Cycling around the countryside
17.    A London secret society who offers you membership on success of your mission
18.    A London secret society who tries to thwart your mission.
19.    A British government agent following you.
20.    A hotel staff member who surprises you by knowing all about your mission.
Posted by Tedankhamen at 8:32 AM No comments: