I initially wasn’t going to get into this 30 day challenge, but the posts I am working on (2 scenarios & some minis rules) are taking longer than expected, so here goes. I may post 2 or 3 at a pop as I have things to do these days, but it should be good for a laugh.

1)      How did I get started roleplaying?
Although I had read RPGs earlier in the 80s, I didn’t have the mental development (i.e. I was a space case) or the group of friends necessary to get seriously into gaming until the end of the decade. In 1989, I was 19 and had just failed out of uni, was working at a crappy convenience downtown midnight to 8 am to make the measly extra 50 cents an hour for fighting off robbers and serving trannies coming out of the gay bar (NB: no big deal for me as I had solid LGBT friends and went to gay bars myself, but the boss & clerks were homophobes and so I was happy to get the extra money). I had an uber-cool, death cookie girlfriend named Naomi who looked a lot like Death: 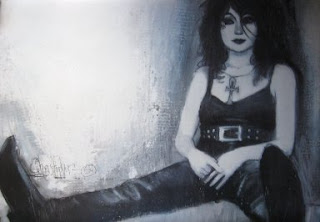 They were playing D&D, of course. The girlfriend was a Valkyrie, Mike played a Dwarf, Damion a Wizard. I rolled up my first character and was in.

That first character was an Elf, and without a doubt, Elf is the race (or class) I gravitate towards. That sweet combination of fighting and spellcasting is just is so much more compelling than a fighter who is toast against the arcane or a mage who can never get his hands dirty. My first character carried two swords (NB: although the first Drizzt Do’urden book supposedly came out in 1988, it didn’t get to my town for a few years, so not a clone of him, although possibly very Elric inspired), had no name I can recall, was chaotic and got banned from the game after 1) setting loose some bone golems, then locking the other PCs in with them (thank you Haste and Wizard Lock), and later 2) setting afire a library we were looting and escarping before the dry papers created a firestorm taking out the other characters. 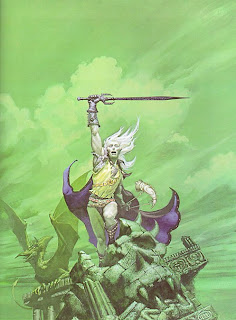 Posted by Tedankhamen at 2:01 AM