Other blogs can be found HERE.

The questions can be found HERE.

12 What humorous RPG have you enjoyed most? Give details.

This question actually requires three answers – which game is funny to read, which is funny to play, and which succeeds at both.

I’ve mentioned Violence the RPG as a great, scathingly witty read, but one which the author himself admits may not be playable. The OSR gem Small But Vicious Dog is another great read, but is ultimately just D&D spliced with Warhammer, and a DM who could get this across would likely have to make the effort with a fake Cockney accent and some Games Workshop goblin miniatures.

Alternately, many Palladium games like Rifts and TMNT make you laugh out loud as you play a nunchaku wielding hamster assassin, but are written with (mostly) sober intentions.

The only game that was both a hilarious read AND gaming experience was the one and only Paranoia. How this game ever got made is beyond me, as it is far too innovative and light-hearted to exist nowadays in this age of focus groups and playtesting and new products rollouts. 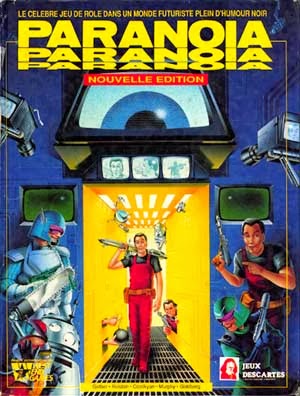 Maybe it was an eighties thing – TOON also comes from this period.

As a player, I remember joyfully backstabbing and being cut down by the other clones, with none of the hurt feelings of D&D or other games. When I ran Paranoia, I spent whole sessions improvising encounters where PCs were issued wrong-coloured gear, or were spray-painted by a robot, or else received a welcome card from their secret society in front of other players. We rarely got to the ‘adventure,’ and didn’t care if we did or not.

The tension of trying to hide one’s mutant power and secret society membership was palpable, as was the psychotic joy of mowing down or being gunned down by your fellows. Whereas in many games players avoid reading the weighty rulebook, the art and snappy prose of Paranoia meant that the rulebook was always lent out to someone in the group.

Not that we referenced the rules anyway. That wasn’t the point of Paranoia – the play was the thing! I think people may underestimate how good a game Paranoia was and dismiss it as a joke , when in fact the dystopian setting and character secrets drew you right in and made playing the game elbow storytelling to the side.

More game designers should be inspired by Paranoia, and more young players should do themselves a favour and give it a shot.
Posted by Tedankhamen at 9:17 AM