Check out the homemade banner above, originally drawn for Vaults of Ur. Good, if too short, memories. I love that dynamic, back of a textbook 1980s feel to the sketch. Apt since I am still in school at the furthest end and still dreaming of being free.
Posted by Tedankhamen at 2:56 AM 1 comment:

Email ThisBlogThis!Share to TwitterShare to FacebookShare to Pinterest
Labels: art


Charisma has ever been the red-haired stepchild of the 6 attributes of classic D&D. Part of the reason for this, I suspect, is that more than any other attribute, Charisma needs a fully fleshed game world full of realistic NPCs to really shine. In the LBBs, Charisma determined both the number of hirelings and their loyalty (p 11), while in the Rulescyclopedia it also affected NPC reaction (p 9), both mechanical facts that confirm this view. On the other hand, Strength, Constitution and Dexterity have always affected dealing, resisting, and avoiding damage respectively, universals in even the least-defined setting, while Intelligence is similarly useful in exploiting the exponential power of spells and using player logic. Wisdom, which was arguably as useless as Charisma in hack-n-slash sessions of early D&D, was later amped up as the key to accessing Cleric skills, with saving throw bonuses also adding to its value.

But in real life, Charisma is one of the most important things you can have. Ask any politician or actor – it trumps Strength or Dexterity, and arguably even Intelligence, in earning power any day, and a charismatic VIP can hire any number of witless bruisers or brilliant scholars to make up for his shortcomings in those areas.

I humbly propose, then, two added rules that should ensure players feel lucky to have a charismatic PC.

First, the Charisma score itself could be used to equal the maximum number of Allies a PC can have. Allies are NPCs that are favourably inclined to the PC in question, who can call upon one Ally for assistance once a session. Allies can also be used by the DM as recurring characters and convenient mouthpieces. Players should define the role of each Ally as they are made, which will determine how they can assist the PC. Example roles can include Informant, Brother (or Sister) at Arms, Lover, Drinking Buddy, Investor, Moneychanger, Fence (as in buyer of stolen goods), Wholesaler, Healer, Priest, Fortuneteller, Trainer, Teacher, Gossip, etcetera. Conversely, Charisma can also be used as the number of Archenemies a PC can make, as charismatic people also have a habit of causing jealousy or disdain in others. The inclusion of Allies in a game gives a great sword & sorcery literary feel, and adds depth and emotional investment to any setting if kept up over time.

Characters can make a new Ally in three ways. First, a maximum roll on the Reaction table should allow them the choice to make the NPC an Ally if so desired. Next, they may choose to make one Ally every time they level up. Last, good roleplaying should naturally present situations where an Ally can be obtained. Conversely, Allies can be lost if their trust is betrayed or they are misused or abused. Allies are not slaves, and will abandon or even attack a PC if misused or abused, which could include a PC stealing or not repaying an Ally money, putting an Ally in danger, or attacking them. In extreme cases, they may become Archenemies bent on destroying the PC.

Second, if Charisma were used as a bonus to natural Charm attacks, its perceived value would increase. If we use fairytale logic, the Charismatic PC would be so charming that he outshines the attempt to influence his emotions, and the DM might even allow him to charm the charmer in case of a natural 1. A handsome knight PC charming a harpy or siren would add great narrative drama to a game, and players would certainly welcome to turn the tables on dreaded charm attacks.

Any thoughts? If you try these rules in your game, please drop us a line and tell us how they went.
Posted by Tedankhamen at 8:01 AM 6 comments:

How a Slime or Gelatenous Cube Works

Posted by Tedankhamen at 10:52 PM No comments:

Question: Your Most Stolen RPG?

I've had quite a few RPG books stolen out from under me over the years. Perhaps 'stolen' is a bit strong, but they have gotten into others' hands and not back to mine against my wishes, so we'll leave details aside.

1 Stormbringer 3e, one back in the late 80s, another late 90s. I am still looking for a copy so I can have the scenario 'Hall of Risk', probably the best fit ever for the genre.
2 Call of Cthulhu, late 90s. Less 'stolen' and more 'never returned' plus 'continental drifted away'. 3rd edition I think, with Cthulhu's glaring eye poking through a smashed door. I just bought the latest, and although it has been 'prettied up' by the art department, its prose has conversely lost some of its charm.
3 Robotech (Invid Invasion, Southern Cross and the core book). Palladium is eminently playable with a 'Palladium Patch' of houserules I made back in the day (and may still be floating out there on the internet somewheres), and Robotech can be used for a great BSG / Space Above & Beyond style game. Also, watching the anime was my daily ritual after coming home as a kid.

I am sure I lost others (TMNT, Elric!, GURPS, Conspiracy X to name a few) but they were less memorable or missed than the 3 above.

What about you? Which RPGs have you lost and wished you had most?

In a lot of the early D&D I played back in the 80s and 90s, setting was never a big concern. NPC interaction was largely handwaved, stores were stocked with every weapon and piece of equipment we wanted, and I don’t ever recall hearing names of the places we moved through nor the people who lived there. Unless we truly went rogue and had to be slapped down by the hand of authority, a trip to town was just downtime between dungeon crawls.

I call this type of setting ‘D&D Disneyland,’ it being a small world, after all. Although I understand that a DM’s job requires such preparation and concentration that sometimes detailing the adventure leaves the world with a slapdash paintjob, my wanderings in the prefab world of Stormbringer always had a realer, more unforgettable feel to them.

As the Young Kingdoms showed me, settings in roleplaying games are really immersive and interesting when their description gives the impression of interacting with a reality obeying its own internal logic, when despite the player characters having the opportunity to become major players in the world, it simultaneously seems to roll on fine without them, and does not stop existing the moment they leave the town and delve into a dank dungeon.

How does the harried DM create a memorable setting that calls the players back every week, makes a trip to town as exciting as a trip to a tomb, all without overburdening his already bursting plate?

One way is to introduce quests for equipment. A quickly resolvable sidequest for something the PCs need, especially when tied intimately to the goings on in the gameworld, can breathe life into an otherwise dull session in town. Sidequests can be overused, taking attention away from the main adventure path if there is one, so choosing one thing the adventurers need as a quest seed and having the explanation come from a denizen of the world should provide just enough adventure and setting colour to enhance the gaming experience. 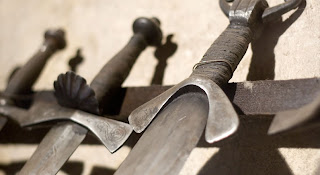 Here are some examples from the mouth of Lena, chatty landlady at any small inn.

“Want some steel pegs, horseshoes or a new sword? Sven can do it, but the last shipment of iron was stolen by goblins. You could go hunt them down and bring back what you can find. Or you could cut out the middleman and go straight to the mines. Maybe the gnomes are still bringing iron up, but last I heard they met something nasty down deep and the lower levels were abandoned.”

“Armor is a whole nuther thing. You need fine craftsmanship, you’ll have to find some dwarves if you want to find anything better than a leather jerkin in these parts. Dwarvish make’ll cost you, but it’ll never rust and fit you like a glove. The elves muck around with chainmail a bit, but for real suits you’ll need dwarves. Humans in the city come close, but the dwarves in the mountains are your best bet.”

“Healing potions are tough. The druid gives out poultices and herbal remedies to folk of his persuasion, but don’t expect anything if you don’t follow the old religion. If you’re paying coin, the witch can whip up a few batches of simple stuff. It’s a bit iffy, and a bad potion could turn you into a frog or whatnot.”

“Staffs and magic rings? Nobody sells that kind of stuff openly. An old noble knight family might have a destitute member willing to part with some trinkets taken by an ancestor, but you’ll have to take what you can get. And get what you pay for. Course there’s always stealing…”

If you do try any of these, drop us a line and tell us how it went. Also, if you have any sidequest ideas yourself, feel free to drop them into the comments section.

Until next week!
Posted by Tedankhamen at 2:25 AM 8 comments: