So anyway, I am in a Facebook group called I'm Begging You To Play Another RPG. Basically, it is for people with 5E or general D&D fatigue, spurred on by the difficulty of finding groups to play indie or other games, as well as the despair of seeing 5E versions of IPs not really suited for it. If you feel the same at times, give it a look.

One of the other Beggars offered to get an online group of Ironsworn up and running. Ironsworn is a Powered by the Apocalypse (PbtA) game inspired by Norse myths, where the PCs are either wardens or other travelers adventuring in the Ironlands, trying to fulfill various oaths they have sworn. There is a defined progression and endgame, and how well characters fulfill their promises determines how they live out their days, in honor or ignominy. 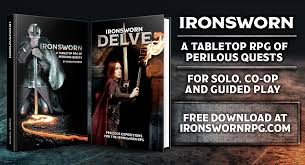 The pre-session our GM ran on ZOOM and Roll20 involved world building by choosing the different of the setting, then starting character generation.

I have never had more fun in my life in a pre-game session.

We decided the following about our version of the Ironlands:

3) COMMUNITIES - The Havens is a central hub, connected by caravan trails to smaller settlements

7) LEADERS - The chiefs of the Havens squabble incessantly, factions vying for control

9) MYSTICISM - Rare and dangerous, magic is wielded by a gifted few at great cost

10) RELIGION - Prayers to gods old and new comfort the folk

11) OLD WORLD - A sickness drove us from there

As someone who HATES canon and dreads the droning info dump of most pre-sessions, the convivial atmosphere of cooperation, where we all discussed and decided on the outlines of the imaginary world we would share, was a great relief and loads of fun. Each choice also came with story hooks which we could hang our PCs' hats on.

We only dipped out toes in character generation before calling it a day, but so far we have the following characters sketched out:

A skald (bard) searching for a lost city!

His companion, a merchant always looking for trinkets!

A monster hunter searching for his disappeared mentor!

A warden haunted by dreams of apocalypse, looking to find the truth behind her nightmares!

In short, the mechanics lead to evocative characters, while the choice of Assets (basically gear or talents) is both rich and devilishly difficult.

I can't wait to see what we all bring to the table next session.

Also, as Beggars with a shared desire to try new game systems, everyone was very open and supportive of each other. The GM was patient, knowledgeable, and flexible, all of which bodes well for the campaign.

The only downside is that I have a new rule set to read just as the new semester and funding application season starts.

Sigh. I guess change is as good as a rest and I'll sleep when I'm dead.

The game is available as a free download HERE. There is also a dungeon-exploration variant called DELVE. If you're looking for an alternative to D&D with emergent world building and character generation, give it some love.

Posted by Tedankhamen at 6:38 AM No comments: