Swords of the Serpentine, rules bloat, and storyfying D&D

I just finished my Swords of the Serpentine (SotS) playtest! The designer, Kevin Kulp, tweeted out the blurb I sent to Pelgrane. Good stuff!

I loved SotS's focus on simple mechanics that allow player choices to shape the story. A lot of the advice on getting players to provide setting details are practices that I have already used for years, such as having players create atmosphere by having them recount travails of long journeys. It is just nice to see these techniques as an official part of a game. These narrative practices are backed up by mechanics, such as attributes that represent both a value, as well as a pool that can be spent to affect rolls or buy story effects.

In SotS, you use a handful of Investigative and General abilities to shape the world, and thus the story. This allows the game to retain a lot of the simple magic of fantasy roleplaying, which I found dwindling away when I played 3E and 4E briefly. The feel of freedom created by exchanging long lists of KEWL POWURZ for simple narrative mechanics replicates well what Dr Bargle called the Pathetic Aesthetic of the (original, pre 5E) OSR.

I think SotS will be a great antidote to the rules bloat seen in the progression of D&D over editions. With the inclusion of Proficiencies, then Feats & Abilities, D&D killed lots of the magic of play for me by trying to mechanically codify all actions with new rule subsystems. 4e went too far with rules for my taste, while 5e seems a step back to the rulings over rules mode of the original, pre 5E OSR movement.

That said, old D&D and other FRPGS were far from perfect. The OSR added lots of much needed shot of improvisational freedom to gaming, a thing which was lacking when I started playing back in the 80s, when a cult of TSR 'sanctioned' rules defined how many played and ran the game. So instead of going into SotS here, I'd like to think about ways retroclones can be storified in SotS style to promote improvisational DMing and emergent play.

First, the Prime Requisite (PR) of each class serves as 1) an indication of free actions, for which no roll is needed 2) a value for difficult skill tests, and 3) a pool of points to be spent for story effects.

For fighters, Strength is the PR, thus any minor action involving Strength does not require a roll but succeeds naturally. For instance, climbing a rope, lifting a barrel, or doing anything a strong person could requires no roll to succeed for a Fighter, whereas other classes would have to make a simple roll. Also, any Strength based action requiring a difficult test for other classes would only require a simple one for Fighters. For example, breaking down an iron door, holding onto a dragon's back, etc. Note that I use d20 resolution for simple tests and d100 for difficult ones, but other DMs are free to use their own system.

Finally, a Fighter player can spend a point of Strength to earn a story effect. Note that this spending doesn't reduce the Strength value for tests, but instead is a limited pool of points that only regenerates after the adventure ends, even if it runs over several sessions, forcing players to spend points wisely. Players are encouraged to creatively narrate the effect, and DMs should refuse boring or unimaginative uses. For instance, a buy of 1 point  could allow an unarmed fighter to bend farming tool into a sword for one encounter, or intimidate 1 NPC / monster, or hold onto a ceiling and stay out of sight as a too powerful foe passes.

Other classes can do the same with their PRs. Dexterity for Thieves, Intelligence for Magic Users, and Wisdom for Clerics would offer similar benefits and opportunities to shape the story for players of these classes. Doing so uses the pre-existing attribute system without bloating the rules with ultimately limiting Feats or other subsystems, and instead offering players the chance to use their imagination to shape the story in ways that will surprise and entertain all at the gaming table.

PS: If anyone wants to hear how running SotS went, drop me a line!

Posted by Tedankhamen at 6:56 PM No comments:

In Over Their Heads Game Starters

There's nothing worse than playing a game that starts off with kid gloves. The book cover may have demons or dragons on it, but you'll never see them because you give up after 3 sessions of killing goblins.

I say bollocks to that. Here instead are some adventure starters that throw the PCs in way over their heads, and give them seeds that can grow into long running background adventure arcs. Each seed requires PCs to have special knowledge, either the dying words of a VIP NPC, a treasure map, or perhaps ancient prophecy. Each also has the possibility of the PCs dying if they try a head on confrontation with a superior foe.

1) The Lich Queen crashes elven spring festival, decimating the revellers and taking over the elven community. The PCs have to fight their way out a side entrance past her skeletal minions, and make their way to the mound where she slept to find a way of defeating her.


2) A flight of dragons is burning all villages out of the hex, driving people from their homes. A dwarf king has a Helm of Dragon control, and can only be stopped by a strike force ready to sneak into the mountain kingdom he has carved out.


3) Sahaguin invade the coastal cities, sending waves of refugees inland. All adventurers are sent to push the water-breathers back into the depths, but only the PCs know they must first travel to the deep desert to find the lost holy city of Sahaguin and the relic that can force the invaders back underwater.

4) A demon stalks the streets of the city, mutilating citizens and desecrating holy sites. He's too powerful to tackle head on, but the PCs know that by tracking down the cult that summoned him, they can destroy the magic that keeps him in this realm.

Feel free to add your own!

Swords of the Serpentine Playtest

So I signed up to playtest Swords of the Serpentine from Pelgrane Press. I've got 5 players and we pull the trigger on February 25th! 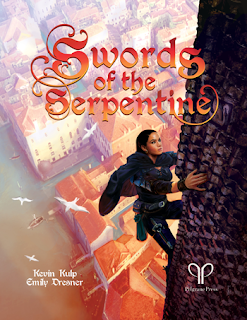 It is a delicious, old school feeling story game that mashes Lankhmar, Conan, and the Discworld all into one glorious local gonzo setting.

Here is the sizzler blurb I wrote for my players:

Except no one here ever calls it that. Eversink is the name written on maps and musty tomes. It's the name pronounced at ceremonies and in foreign courts.


You're likely to get your throat slit calling it that, here.

The newly-arrived call it Everstink, as their nose is assailed by the stench of mud, blood, and offal floating in the Serpentine RIver that runs through the city.

To sellswords & soldiers it is Bettershank, as in 'Better to shank first.' It is a policy that'll keep you alive in the backstreets of the southside, or the noble houses of the north.

The scouts, spies & sneakthieves have named it Shadowslink, the place where they feel safe to steal whatever secrets can bring them the most fortune.

The believers of Denare call it The Shining City. Everyone else jokes that is true if you count the oily skin on the lower half of the river.

Power hungry sorcerers call it the Whorl, for they see the maw of energy that swirls over the mundane streets as the turgid river flows between and under them.


The guard just call it 'here,' most likely used in the phrase 'What's going on here, then?' They have no time worrying about words when they are busting heads to keep the city from falling apart, or else keep food on their table.


The nobles and artisans avoid naming the place together, instead referring only to the district they are going to or coming from. They speak of the Estates where they live, the Works where goods are made and sold, the Farms on the outskirts that feed the city, and the Markets where everything has a price. Everything below that is Southside, where nobles only go when they want something ignoble done.


Now how's about a few coins in thanks for saving you a lot of trouble, gov?

Posted by Tedankhamen at 4:59 AM No comments: