It is no surprise that I love the Stormbringer RPG.

I read all of Moorcock's books I could find at an early age.

I collected the comics, Thomas & Russel's Elric, Mignola's Corum, and the varying others. 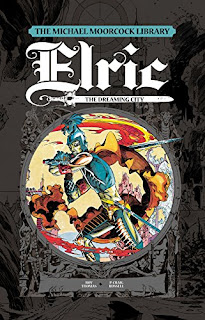 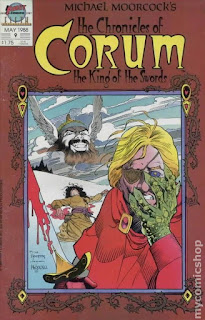 Stormbringer 3e in the green cover was my first non-D&D RPG. It was stolen out from under me. I had Elric! and that too disappeared.

(If you have an old copy of any edition and want to support me, drop me a DM. I'm willing to trade or pay a fair price).

Now, I am into story games and modern game design.

I think I will try my hand at re-creating Stormbringer using the insights I have gleaned from games like Swords of the Serpentime, Powered by the Apocalypse, and Alien.

My first instinct is to look at the skills list, but this is a misstep. Stormbringer isn't about skills, it is about the conflict between Law and Chaos, one that has reverberated through roleplaying since the beginning of the hobby. Each edition of Stormbringer had its own incomplete and poorly implemented take on allegience to these powers.

This is where I will start. If I can untangle the concepts and how they were implemented, maybe I can find the way in to this maze.

Posted by Tedankhamen at 6:56 AM No comments:

The Tyranny of Backstory and the Freedom of Emergent Roleplaying

Back in the day when I played GURPS, I spent a day making a PC with a great backstory. He was a delusional bard who thought he was a king, and was searching for the lost kingdom of Wallachia to reclaim his throne.

He was killed by another PC, an assassin minmax killing machine made by an A-hole friend of a friend, during the first session.

I played 5e once, and was given 4 pages of character sheet with a list of useless stuff and overblown backstory. None of it was used in the session.

Before either of these games, I had played OD&D, with zero backstory, just a half empty character sheet to start with. There was something liberating about rolling dice 6 times, adding one name, some gear, then jumping into the game. Backstory was something we made as we played, old adventures we told newbies who came to our table.

Let's think about this through the lens of fiction.

What if, before you went to see the first Star Wars movie, you got this backstory:

"Luke Skywalker is a Tatooine farmboy who rose from humble beginnings to become one of the greatest Jedi the galaxy has ever known. Along with his friends Princess Leia, who is really his sister, and Han Solo, Luke battles the evil Empire, which is lead by his father Darth Vader, and fights to end the tyranny of the Sith, lead the Emperor Palpatine, who was a senator in the Old Republic."

If you read that first, would you want to go see the movie? Now you understand how I feel.

WHAT'S THE PROBLEM WITH BACK STORY

The way I see it, there are three issues with backstory in RPGs.

Just as the mystery of Luke's family is an integral part to the appeal of Star Wars, leaving the mystery of your character's background is part of roleplaying's charm. The point is to fill in the blanks as you play, to let the GM suggest or surprise you, just as Luke was shocked at discovering his father and sister's identity. 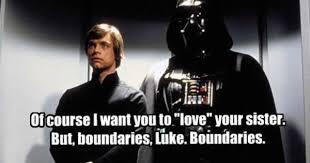 There is a correlation and tension between the length of character generation and how much you want to keep the character alive. When I played 4e, it took over an hour to make a character, and every battle felt like a slog with an inevitable victory at the end. There was none of the challenge or risk of other games I had played. We were a party of Mary Sues, to all intents and purposes, with the GM afraid to kill us off lest we abandon the game after the time we had invested in it. 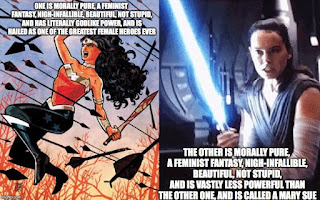 This is not unique to D&D. Traveler is an exception, generating a character history loose enough to let dots be connected interestingly.

3 Backstory is not earned

Back in the day, no one would ever think of starting at any level but 1. Now, I have been at tables where newbies start with multiple levels and randomly rolled magic items and other gear. To me, this feels like a cheap cheat, a subversion of the very sense of accomplishment leveling up in D&D had back in the day.

One solution is to embrace what I call emergent roleplaying. Beyond the most basic of information (first name, gear, profession), a character sheet should start blank, and be gradually filled in as play progresses.

What would emergent play look like? It would have to be a collaborative act between GM and players, who must always agree on details that arise. The surprise of some details would make the play as emergent and exciting for GMs as it would be for players.

HOW TO PROMOTE EMERGENT ROLEPLAYING

1) Leave the character sheet blank. In OD&D, we started with the 6 stats, a name, and a kit of starting gear. This was all we needed. You might want to have players add a detail for every level gained, and make a list of suggestion as follows:

2) Don't decide everything at once. I am running Call of Cthulhu now, and players are using pregenerated characters. None of them have the Spanish language skill they need to decipher the tome they have found. I suggested that players change other language skills to Spanish, in other words, retcon their PC skills. Although they were reticent at first, two have already done so, and one has finished his reading (and Sanity loss from) the ancient book. Players can't foresee what they'll need in an adventure, so give them the leeway to change skill choices to ensure their success in pushing the adventure forward. Especially useful / necessary in investigative games.

3) Discuss filling in the blanks together. When I played Ironsworn a few weeks back, the first session was spent filling in the gameworld together. This made us invested in the world from the get go, and as we played, we interpreted Oracle and other rolls in ways that accorded with this interest in the gameworld, and prized the emergence of the character in it. GMs could tell players that flashbacks are allowed to explain new details, so long as it fits the spirit of the game and the emergence of the character. In the Swords of the Serpentine game I ran last year, there was a power that let PCs relate a flashback showing how they had prepared for the situation at hand. This is seen often in heist or adventure movies, so is a good fit for RPGs as well.

Try emergent roleplaying. The only thing you have to lose is the baggage of backstory.

Posted by Tedankhamen at 6:35 AM 2 comments: 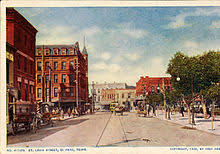 In which the PCs get a telegram from their acquaintance, renowned southwestern archaeologist Llewelyn Stanley, informing them of a find he has made, the danger he is in, and fixing a time to meet in El Paso.

However, Dr Stanley does not appear, and so the newly acquainted PCs make their way to the Hilton to search for him. Their entreaties to the reception fall on deaf ears, but they learn from an elevator boy that he is on the floor below the penthouse, and has complained of the noise coming from a party there. 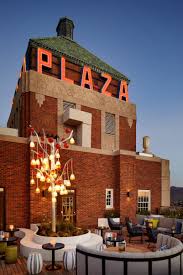 Artie makes his way up the stairs alone, slips into the penthouse party, and meets a mysterious transportation expert.

Lady Jane, Shirly, and Dr Bedford go to the floor, only to be rebuffed by two burly Azteca Films workers guarding Dr Stanley’s door. They retreat to the lobby, where Shirley contacts the police.

Dr Bedford keeps watch in the bar, while the ladies of the party makes their way to the 11th floor again with two policemen. A firefight ensues just as Artie arrives, and one policeman is killed while the two door guards are dispatched. The policeman sends Lady Jane for backup. Two more assailants are in the room threatening to kill Dr Stanley, so Artie sprays the room with toxic fire retardant from the hall. The assailants rush out, felling the remaining policeman, but being dispatched by Artie, who is also heavily wounded. 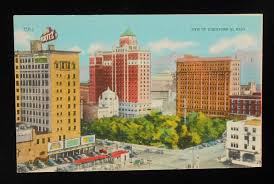 Shirly electrocuted herself and aided Artie with her sawed off shotgun.

While all this is happening on the 11th floor, a half dozen members of the Crucias gang storm the lobby and rob several safe boxes. They drive off into the El Paso night, while Dr Bedford precures a cab and follows them from a prudent distance. He finds out the location of the hacienda where they hole up.

All others – Hale and hearty, somewhat tipsy 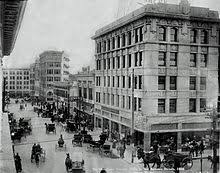 Posted by Tedankhamen at 2:26 PM No comments: