OK, so as you can see I have two copies of the Dragonhalf RPG: 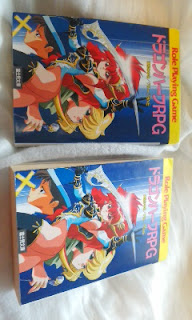 Some readers have expressed desire for a copy. Well, here's your chance.

I'll be accepting PMs to Google or tedankhamen at hot mail.
If you know this blog and my interests (Stormbringer, Unknown Armies, other old funky stuff) and want to trade, make me an offer.

Remember, this book is only in Japanese, not English. If what you offer seems a higher value, I'll throw in something to even things out. Feel free to do the same.

Here is another installment in my Dungeons & Manga series. However, this time I'll be going as far from D&D as you possibly can, both in terms of system and use of manga-style art. 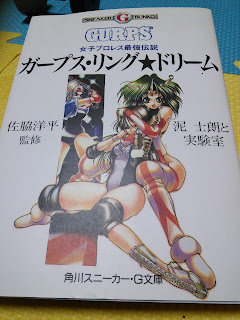 Funnily enough, in my old bookstore scavenging, I have come across a fair amount of GURPS material. On the one hand are translations of books like GURPS Magic or Martial Arts, all with manga art boiled down into the pocket size versions that are still popular here. On the other are 'Japan-only' games created for the home audience. The same phenomenon happens for video games, where dating games or JRPGs might sell on the PS in Tokyo, but are never intended to go beyond Japan's borders, for both gaming niche and cultural unintelligbility reasons.

GURPS Ring Dream is one such Japan-only GURPS product. It would be interesting to see how the license was obtained... 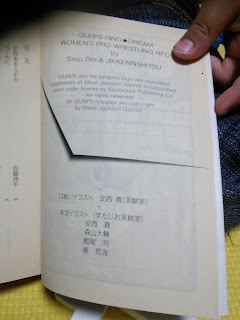 Anyway, GURPS Ring Dream is described as a Women's Pro-Wrestling RPG, a genre represented in video games by Rumble Roses. Whereas English RPGs usually start with a blurb of fiction to set the scene, from the first page Ring Dream uses manga as the fictional underpinning to the game. The manga introduces us to Chika, the orange-haired girl who dreams of being a pro-wrestler. Allow me to translate: 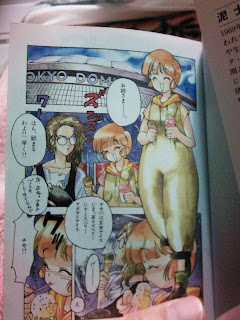 Chika: (carrying two ice creams) Here I am older sister!
Sister: Look, it's starting! Hurry up! Did you get my coffee-flavored ice?
Chika: And my brown rice, green tea, and strawberry-avocado ice. It's delicious!
Sister: Chika, watch out! 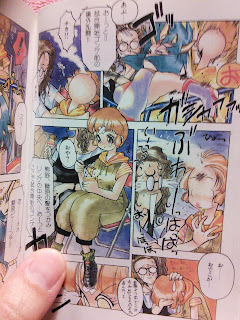 (A lady pro-wrestler falls onto Chika) KER-SMASH!
Sister: Watch out! (guffaws at Chika smeared in ice cream)
Chika: (notices ice cream is all gone from her cone) Hunh?
Ring Announcer: Kumano has grabbed Ajihara's hair and thrown her to the center of the ring. Here comes the starting gong! 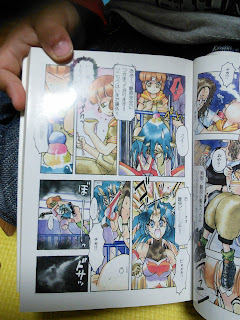 Downed wrestler: (groans)
Ring Announcer: Uh oh, Ajihara is completely pinned! Sonic is still outside the ring!
Chika: (spies the ice cream on top of Sonic's head) If I can just grab the scoop on top... it's do or die!
Ring Announcer: Ajihara is in a pinch!
Sonic: (jumps to her feet) Hiya!
Sister: Chika. what are you doing?
(sounds of battle as Sonic jumps in the ring and throws around her opponents) 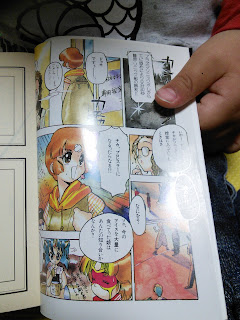 Ring Announcer: With a Plasma Sonic Bomb and a Lobster Hold, Sonic and Ajihara win the match!
Chika: (outside of wrestler's dressing room) Thanks for your time!
Wrestler: No problem, sorry about what happened.
Sister: I was surprised that you went to Sonic's dressing room, Chika!
Chika: I've decided!
Sister: On what?
Chika: I'm going to become a pro-wrestler!
Ajihara: Sonia, who was that girl eating that load of ice cream?
Sonic: No idea...

I don't know about you, but this set up goes far beyond the pale of my GURPS experience. How would you GM this?? It sounds more like a storygame, or a Japanese storygame like Yuyake-Koyake than GURPS.

The manga fiction does not end there. After these 2 splash color pages, an entire manga chapter details life in the women's pro-wrestling dojo. Let's see what Chika goes through: 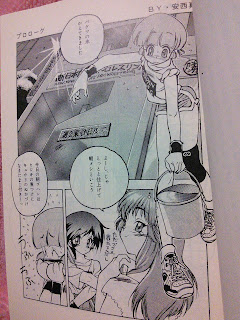 Chika: (carrying a bucket of water) I've brought back the water.
Girl 1: OK, let's clean this place up and go for breakfast!
Chika: Today's breakfast is dark seaweed broth with cucumber pickles and rice with a raw egg on top! (slobber slobber) 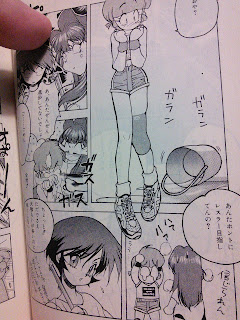 Chika: (notices the bucket she has spilled) Hunh?
Girl 1: Ack! We haven't gotten anything done!
Chika: I'm sorry!
Girl 1: Nothing! (smacks Chika in the ribs) Do you really wanna be a pro-wrestler or not? Unbelievable.
Girl 2: Hold it! Just because you like eating doesn't mean you don't have to hurry up and do things... 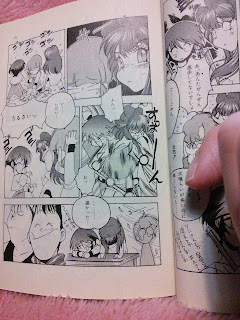 (sounds of girls scrubbing floor)
Chika: (gets slapped by both girls) Ouch!
Girl 1 & 2: Too late, we missed it! I don't want to get another convenience store meal... 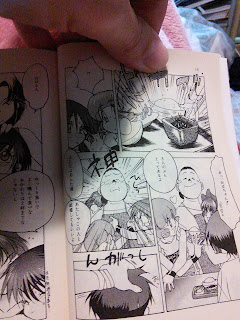 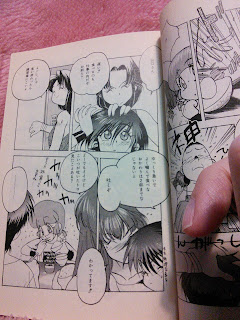 Girl 2: (grabbed from behind by Ms Yamaguchi) Ms Yamaguchi?
Yamaguchi: You're so slow! Eating is a part of your work, you three! OK, once you've finished let's go to the practice mat. Take your time but hurry up, chew slowly, and only have two refills or else you'll barf.
Girls: We understand!
Girl 1: (looking at Chika gobble down her food) I don't care either way, but you ever seen this girl puke?
Girl 2: She's already on her 3rd plate. 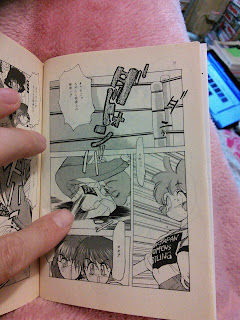 THUMP!
Yamaguchi: Hey! You there, do a proper breakfall! A breakfall!
Girls: (seeing Chika flop on the mat) Wow! 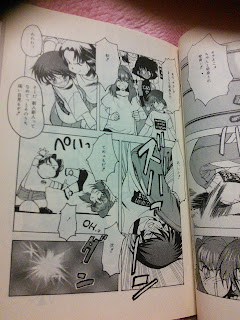 Girl 1: Chika did a true breakfall!
Girl 2: That's a first.
Yamaguchi: (grabs a girl from behind) Beginners shouldn't laugh at other beginners, or they'll learn a painful lesson! (throws the girl on the mat) You try a breakfall too! Who's next? 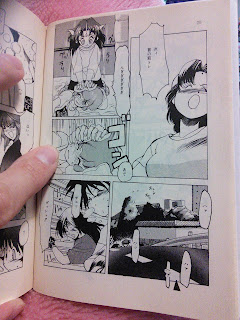 Yamaguchi: Next is neck muscle training!
Chika: (has girl pushing down on her head) Ack ack ack!
THUMP
(sounds of heavy breathing, running) 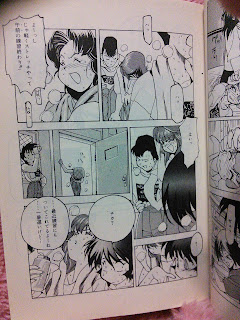 Yamaguchi: (breathing heavily) Ok, let's do some light stretches and end MORNING practice!
Girl 1: Chika seems to be keeping up with practice recently, even though she's still the slowest. 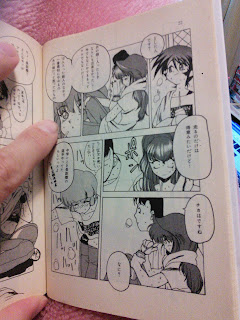 Girl 2: So what?
Girl 1: That girl, when she came here, she couldn't do nothing. She still can't do much even now. I thought of the ten who joined here she'd be first to quit. The only thing she is good at is running.
Girl 2: And Chika...
Girl 1: What?
Chika: (thought balloon) I feel sick but it'll be a waste if I puke...
Girl 2: She was a long distance runner in junior high. 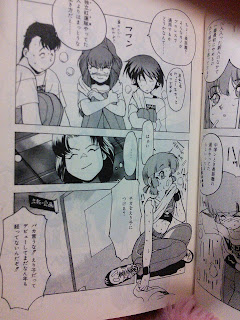 Girl 1: Long distance runner? That is no help in pro-wrestling.
Girl: Yes, but it means she's tough.
Girl 3: It means she's had a more normal existence than us tough fighter-types.
Yamaguchi: Shall we put Chika under Eriko for training?
Manager:  Don't be stupid! It's only been a few years since Eriko debuted as a pro. 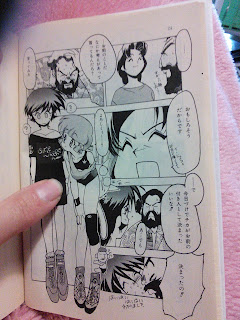 Manager. (speechless for a second) If you say that, it means you have something up your sleeve. Tell me what.
Yamaguchi: Just seems interesting.
Manager: We've decided to put Chika under you for training today.
Eriko: But...
Manager: It's decided!
Chika: (bowing) Looking forward to learning from you!

This manga is a snapshot of the Japanese apprentice system used to educate craftsmen and martial artists. Shit rolls down hill, but with a reason - to toughen you up. Unlike western RPG fiction, this manga concentrates on what would normally be downtime training to set the scene for play. Still, as nice as it is, it leaves me scratching my head on how to use this in a game.

The manga doesn't end there, but continues in set piece spreads throughout the book. I'll skip over these, however, to take a look at something far more interesting - the mangatized descriptions of pro-wrestling moves and GURPS character sheets.

But that is a tale for another time...

Next up - Ring Dream Part Two: Piledrivers and Money Shots!
Posted by Tedankhamen at 10:27 PM 2 comments: