The PhD thesis is in. 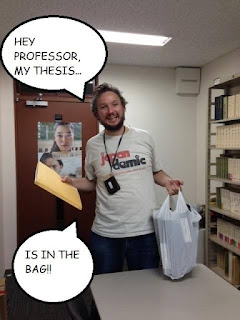 Next up, work put me on a sabbatical till April. I've signed an NDA and am happy to close that chapter of my life.

If any of you are thinking of doing a PhD, let me say this:

Especially if you are married. That supportive spouse will come to resent the time you spend away, and hate how absent minded and unhelpful around the house you've become.

Super especially if you are working to pay your way through. Your job performance will suffer, coworkers and supervisors will hold your feet to the fire more than workers not doing a PhD. If you can, keep it on the QT.

So anyway, back hopefully to blogging, gaming, and generally enjoying life more than I have in recent memory.

Here's my inaugural post as a free man and doctor of philospohy. Very in keeping with my thesis on discourse:


Ever wonder why there are still kings and queens in the D&D world. If player characters are so powerful, why don’t members of the 4 classes rule every nation?


(PS: I know many D&D products have PC classed NPCs as rulers, this is just a thought exercise with delicious implications).


The answer is that the power corrupts and makes their society inherently unstable. Any nation ruled by a player character class is a dystopia that ultimately comes to a bad end.


Each of these societies has characteristics which can be divided into the Good, the Bad, and the Ugly.


Here’s how it breaks down:


Ruler: Cleric.
Government: Theocracy.
The Good: Priests cast a level higher! Pray sincerely and miracles happen!
The Bad: You’re either with us or against us. Priests of other gods cast as one level lower, save at - 1 vs holy magic of our god.
The Ugly: Inquisitions, burnings, holy wars. This type of nation usually ends when the witch trials and inquisitions get out of hand and people leave the cities, where they are retaken by vegetation in a few years. Or else, they pick an illogical religious war with neighbors, who band together to wipe the floor with them and place a secular or at least non-fundamental regime in their place.
Examples: Berserk by Kentaro Miura


Ruler: Fighter.
Government: Dictatorship.
The Good: Can levy double army size. Arms and armor can be had at rock bottom prices.
The Bad: Violence is always the answer. Everyone is armed or guarded and ready to thrown down at any moment.
The Ugly: To the victor go the spoils, to the loser go pillaging, rape, mass mutilations or beheadings. This type of nation usually ends when the great leader is bumped off by another, or when neighbors band together to send an army or a group of murder hobos to take out the dictator and replace them with a non-PC class figurehead.
Examples: Game of Thrones (? dunno, haven’t seen TV since I started the degree…)


Ruler: Thief.
Government: Kleptocracy.
The Good: Anything can be bought, for the right price.
The Bad: Watch your purse every second.
The Ugly: Assassination is the solution to every problem. Usually such a nation ultimately devolves into a nation of beggars living in the ruins of once nobles cities as thieving skills are not passed or as teachers are strangled or poisoned off.
Examples: Nadsokor (Elric series), Thief Town (Adventure Time)


Ruler: Mage.
Government: Anarchy.
The Good: Potion shops, wand & staff ateliers, flying castles, it is all here, and at rock bottom prices compared to other places.
The Bad: Mundane, non-magical folk become the underclass. Killing them isn’t even a crime.
The Ugly: Monsters, monsters everywhere. Chaotic creatures are drawn to this place, and welcomed with open arms. Eventually the Tarrasque will show up and eat the place whole, or demons will infiltrate the ruling structure and turn it into a hellmouth or warp the kingdom to some shadow plane. Within a generation it is a myth or legend become cautionary tale.
Examples: The Shadow Plane (Elric), Sigil (Planescape), Wizard Town (Adventure Time)