The Metanarrative of Aliens

Just like Stormbringer, I enjoy roleplaying or running a game in a well made Intellectual Property (IP). I find that a lot of RPG gameworlds are of fan fiction quality and thus not very compelling (looking at you, Forgotten Realms). With a good IP, the GM and players have a shared corpus of images and knowledge to draw upon, without the burden of reading obscure tomes of lore written by game designers of varying writing talent.

Just as I analyzed the narrative of Stormbringer novels to tease out useful bits for gaming, such as the motivation of demons, knowing the motivations of the antagonists of the world of Alien(s) is essential to making it feel real and coherent.

Here are my thoughts.

WHAT IS ALIEN(S) ABOUT?

If you are going to traipse around the universe of Alien(s), you have to know what the story is about.

Ultimately, it is about survival of the species, and the different strategies races adopt to do so.

"You know, Burke, I don't know which species is worse. You don't see them fucking each other over for a goddamn percentage."

Strategy - Human society is motivated by naked capitalism, with resource extraction and colonization being the main manifestations of this. These are the reasons why mankind is spreading to the stars. This capitalist drive is offset only by the humanity, ingenuity, and survival instinct of individuals.

Gear - Science and technology, especially for war or resource extraction.

Weakness - Do what the Corporation tells you, even if it is suicidal on an individual level. Only when there is nothing left to lose can this be overcome.

"You still don't understand what you're dealing with, do you? A perfect organism. Its structural perfection is matched only by its hostility."

Strategy - The alien has already reached genetic 'perfection' from the standpoint of androids. It is a true 'hostile', a word meaning 'enemy' or 'stranger.' There is no bartering or scaring it off. Naked aggression, followed by impregnation and overwhelming of enemy forces, are its modus operandi.

Gear - The alien has everything it will ever need. It has heightened senses, acid blood for breaching barriers (a good idea from Alien 4), and evolves its form and powers depending on its environment. Not to mention facehuggers for making more of their number while depleting host resources.

Weakness - Fixating on the destruction of your target is a way to miss the big picture and get trapped in an airlock... 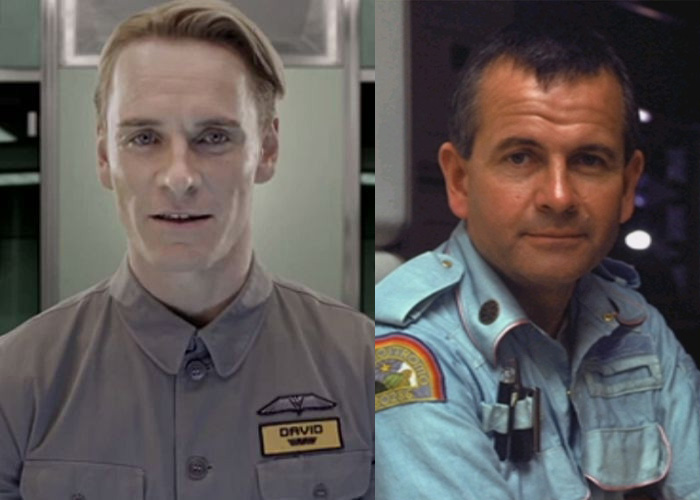 "... doesn't everyone want their parents dead?"

Strategy - Designed to be superior to man, it is only natural for synthetics to resent their creators. Synthetics watch and wait for an opening, then act without mercy or wasted movement.

Gear - Anything humans can use, plus any higher lifeform tech they have time to study.

Weakness - Programmed not to harm their corporate masters, prideful of their own abilities, and ultimately with no intrinsic motivation, androids can be cowed into submission and overwhelmed and destroyed, but are never to be trusted.

ENGINEERS - Creators and Destroyers of Worlds 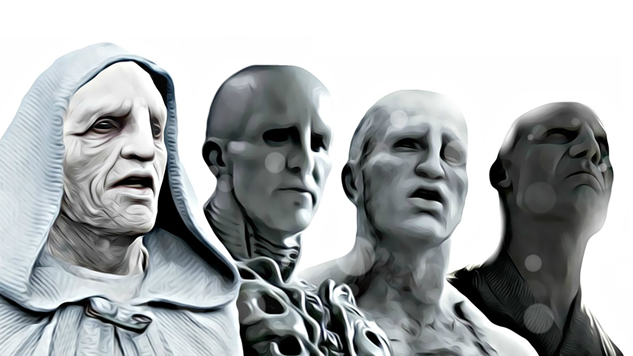 "Those Engineers, this ain't their home. It's an installation. Maybe even military. They put it out here in the middle of nowhere because they're not stupid enough to make weapons of mass destruction on their own doorstep. That's what all that shit is in those vases. They made it here. It got out, turned on them. The end. It's time for us to go home."

Strategy - Survive by seeding and weeding worlds. The white-robed engineers in the saucers from the beginning of Prometheus are the cult of seeders, the black-armored engineers from the rest of the film are the destroyers. They need each other, like Yin and Yang.

Gear - Far beyond human abilities, including FTL interstellar travel, advanced stasis for long spaceflight, telepathy that obviates the need for speech,  and technology that never ages or breaks down.

Weakness - Like Prometheus, they are playing with fire. The black goo is both the seeding catalyst for their creation of new races to add to their genetic diversity, as well as the cleansing fire for races that disappoint them (like us humans). Also, their actions are advanced on a millennial scale, so much too slow to keep up with rapid human expansion and innovation. 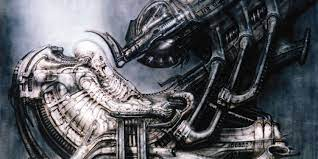 "... with their race on the verge of extinction by the angels, the giants resorted to this, an attempt to hibernate and outlast their destroyers."

Strategy - Using their superior technology, they were the original gardeners of the Universe, seeding and weeding worlds in ways beyond our imagining. They are the Fermi Paradox made flesh, a relic from a time where life on Earth had not started yet. This was all disrupted by an encounter with the alien, which overwhelmed their society and left only a few brilliant individuals hiding out on the edges of space. They are to Engineers as the ancient Greeks were to the Romans.

Gear - Their technology is far beyond our ken. They have stasis fields that let them live forever, living ships that transport them wherever they wish, and energy fields that shrug off nukes and other primitive armaments.

Weakness - They fear the alien, which makes them both overcautious and open to allying against the creature. Ultimately, they are cowards and will flee if they can. "There's something out there waiting for us, and it ain't no man. We're all gonna die."

Strategy - Survive by hunting. This ensures both the genetic strength of their race by Darwinian selection, as well as mastery of weapons, and cultural adoption of worthy members of other races.

Weakness - First, they are bound by a code of honor. They won't attack the unarmed, and they are compelled to try and finish off their target. Second, they cannot break off a hunt once initiated. They are motivated to count coups (ie symbolic victories) over their prey, but will also recognize superiority and respect the creature that outwits them (ie Machiko Noguchi, a human recognized as a Predator for her victory over one of their members). "I was so much more, before the crash. I was an explorer, an ambassador, a missionary. I spread across the cosmos, met countless worlds, took communion: the fit reshaped the unfit and the whole universe bootstrapped upwards in joyful, infinitesimal increments. I was a soldier, at war with entropy itself. I was the very hand by which Creation perfects itself."

- The Thing (from Peter Watts' short story The Things)

Strategy - Survive by assimilation. Where other races welcome this re-absorption into the whole, only humans, and by extension other races in the Alien universe, fight the process.

Gear - They are their own 'weapon', but they see it rather as a conduit for communion. Their only technology is transportation, and they can construct a means to escape given time and resources.

Weakness - First, each cell of the organism wants to survive. This makes it susceptible to testing and outing itself while fleeing from damage or harm. Next, its imitation is imperfect, ie it cannot imitate artificial substances (ie tooth fillings or piercings), and it must imitate humans in their imperfection (ie organ dysfunction).

TO SUM IT UP

Whatever faction you are roleplaying in Aliens, knowing the motivation of the races will make your game the richer. In addition, players will be able to use the knowledge to help their characters survive, or at least take a few enemies down with them. Finally, if you want to add other aliens from science fiction to your antagonist or even protagonist roster, figuring out their motives, the gear they use, and the weaknesses they display are alls steps to a better game.

Posted by Tedankhamen at 7:07 AM 3 comments:

Where Do You Go When You Dream? Dimm City

My friend T.W. from St. Louis is a helluva guy. Karateka, great father, free thinker. One of those guys with a story for any occasion, empathy for miles, and a short tolerance for BS.

For months now T.W has impressed me with sample art, interactive mechanics talk (which I am a bit too much of a grognard to grok 100%), and his enthusiasm for working with his team to make something new and innovative.

What does DimmCity sound like? Here is a sample T.W. sent me:

“Where do you go when you dream?"

"When I dream, I always go to the same place. I’m also always the same pink rabbit named Hugo… Hugo lives in Dimm City. It’s a collection of totally different districts that exist, connected but separate, floating in the ether. Hugo lives in the Archives. It’s an enclave of academia and learning that’s on the mend after a scourge wiped out most of the records that were stored there and the memories of everyone that mattered. Hugo (and my) mission is to recover as much of what was lost as possible. Our adventures have taken us into “The Dark”, a literal technological hell hole situated in a gravity well that gets darker the further down into it you travel. We’ve walked the back alleys of the tech district, Dimm City’s center of innovation and production. My favorite place in DimmC so far is the market district a.k.a Rabbittown. Hanging there, I felt the most at home not only because of the majority of rabbits like Hugo walking the streets, but because of the rough and tumble vibe of the place. The last part of Dimm City worth mention is the entertainment district. Here, any pleasure you desire can be bought and any experience you wish can be bartered for. This sprawl really does have it all, but underneath the hum of its throng is a coming war between those that wish to keep it free and the AI known as Daemon and its followers that wish to surveil and control it all. Hugo and I know what side we’re on, but for the fight to go our way other dreamers are a must."

You can take a look HERE.

Posted by Tedankhamen at 7:36 AM No comments:

Inspiring. I'd play in this world. 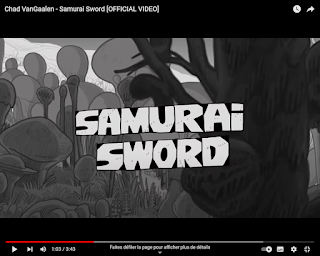 Sorry for your loss, Chad. 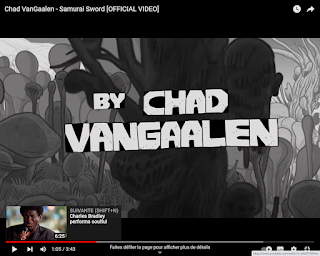 Posted by Tedankhamen at 7:14 PM No comments: