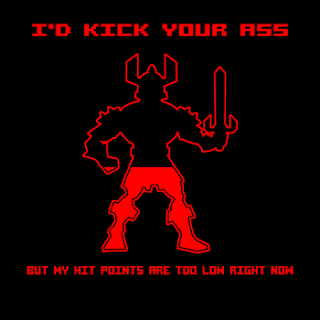 Hit Points aren’t health. They never were. Or if they were intended to model health in the beginning, they quickly mutated into something else through play. Intentions aside, they are probably the most important invention or convention in gaming, and are used in everything from FRPGs to puzzle games to date sims.

But they don’t make much sense, logically.

A blacksmith has less hit points than a wizard who hangs around dank dungeons. Really?

A wizard can be killed by a cat. Really?

A newbie fighter can be killed with one good blow, but a veteran can take a dozen cuts but soldier on. Really?

The problem with questioning the game mechanics in this way is that D&D isn’t a reality simulation. Ceci n’est pas la verite. Since OD&D, people have tried to add pain calculations, health statuses, and other accoutrements to make Hit Points make logical sense.

These additions miss the point. Hit Points and D&D itself make sense intuitively, not logically. Part of the joy and challenge of roleplaying in general and D&D in particular is wrapping your mind around what story those esoteric character sheets, rulebooks, and dice rolls tell you.

Hit points are how important your character is to the story. If you’re a 1st level mook with a sword or a light spell, you don’t matter. If you’re the diva of the thieves’ guild, you can shrug off a battle-axe.

Intentionally or not, this reflects the literature that inspired the original fantasy game creators. Think of Beowulf. As a young warrior, he and his mates are nearly decimated by a troll and its mother. For a low level fighter, those Claw/Claw/Bites mean death.

As a seasoned fighter, Beowulf takes a dragon on by himself after his servants abandon him. He is taking damage and ultimately perishes, but saving against Breath Weapon and trading blows makes taking the dragon down with him much easier.

D&D is not realistic or logical. But it has a real feeling that we intuitively acquire, a verisimilitude that draws us in. DMs should capitalize on this, not let a mistaken desire for ‘reality’ to mar the immersion of fantasy that is the magic of roleplaying.

So stop describing combat as hit or miss. A sword stroke may cleave an armored novice priest in twain, but the same roll and damage is barely a scratch to a high priest wearing nothing but robes. A fireball wipes out a party of murder hobos, leaving ashen silhouettes on the ground, but rolls over the Defenders of the Realm, who grit their teeth and hunker down under their shields before returning fire.

So DMs, don’t fight the concept of Hit Points with your head. Accept them with your heart and let them tell their story through you.

One could also free Hit Points from the tyranny of damage, alleviating the whittle down effect of combat. How about burning HP for a reroll, letting them stand in for Luck or Hero Points? Hit Points thus become a pool of narrative ‘bennies’ that can be burned to let players get what they want, but at the risk that their story may end prematurely.

In the next game I run, Hit Points will go unchained. No plan survives contact with the enemy, as they say, so I’ll let you know how it goes. If you take this idea and run with it, tell me where it worked and didn’t.

(PS Blogging ice age is coming to an end, as is gaming life and social life. Feels good)
Posted by Tedankhamen at 5:48 AM 9 comments: