Rereading The Hobbit, it strikes me that hardly anyone dies. The defeated heroes are instead captured by trolls, or spiders, or elves, or a friendly werebear. These throwaway characters end up having larger significance when you read Lord of the Rings where the elves of Lothlorien, the spider Shelob, and Tom Bombadil are used to expand on this story construct. 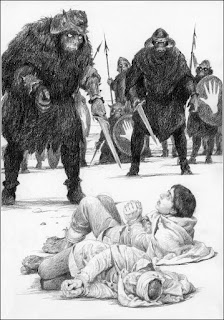 In other words, Tolkien often exchanges death for a story hook. Although Tolkien is cited as an inspiration for D&D, the lethality of early versions of the game and its rivals like Traveller point to a pulpier, more lethal origin. Player dissatisfaction with this high lethality in comparison to the fiction origins of the hobby have in turn led to a buffing up of character resilience in later editions and games.

However, at heart rpgs are about telling a story communally, and I think exchanging death for story hooks is a good way to accomplish this. Letting PCs cheat death in a way that complicates the story for good or ill is a practice that will reap unseen rewards in verisimilitude of and engagement in the game world. This realization has inspired me to create a table allowing characters to avoid death in favour of other story developments. This table can be used for any genre (except horror, where death has to be final), so I will give examples from Fantasy / Science Fiction / Adventure / and Supers gaming to help the GM flesh out the details in the context of their game.

When a character is felled in combat, roll 3d6 and consult the following table.

Yet even in Tolkien’s world, significant people die. Boromir. gives his life to warn his fellows and let Frodo and Sam escape. In a true story-centered rpg, death should be a choice that has major story repercussions.

If a player does not want to continue using the character that is defeated in combat, he or she can instead opt for a Heroic Death. A Heroic Death is one that has great significance, that benefits the party or the cause they work for. Players can only choose a Heroic Death when the party is in real peril, and can’t be used just when they succumb to unlucky rolls but others are safe. Choosing a Heroic Death trumps mechanics, it just allows a story effect negotiated by the player and GM.

Examples
You close the portcullis / airlock / tomb door / warp tube, allowing the others to escape the explosion.
You stop the monster / alien / cultists / assassin long enough for the others to get away.


You use your body to shield your fellows from the firebolt / laser blast / grenade / cosmic beams, allowing the others to achieve their objective.
You slay the last orc / robo-sentry / Nazi / cyborg and let the party move onto the McGuffin.

I'll definitely be trying this in the next session I run, especially if it involves old school lethality.

Posted by Tedankhamen at 11:28 PM No comments: