What Constitutes A Move?

So I read this post about hating story games because Powered by the Apocalypse (PbtA) uses playbooks and moves HERE. I gotta say, although I don't know PbtA well, I think there is a lot to unpack in this post and the argument it makes.

Basically, the OP was appalled that a PbtA gamemaster defused a player's stated intent to 'Kick Ass' by making them choose between fighting a monster OR getting to their vehicle. The cited problematic exchange is as follows:


Alan, the Keeper: “The flayed one is racing you to the car,and it looks like it’s going to get to you before you can close the door. So Mark, what do you do now?”Mary, playing her hunter Mark: “I kick some ass*!”Alan: “What are you doing?”Mary: “I’m going to smash it out the way with my baseballbat so I can get in the car.”Alan: “That sounds like you’re not really getting into afight: what’s most important? Killing the flayed one or gettingto the car?”Mary: “Oh, yeah, killing it I guess. I’ll stop running andjust start smashing it on the head.”

To me, 'Kick Ass' just means attack, and I wouldn't have asked 'What are you doing?,' which prompts the player to split their intent between 'smashing' the monster and 'get into the car'.

The OP states their problem with the exchange as follows:

"Why can't the PC try to bash the monster out of his way and get into the car? Is their some in-story reason for this? Doesn't sound like it - it just sounds like the game master is forcing the player into an action to keep to the structure of the rules. This is what I mean when I refer to structure getting in the way of story."

First, the very idea of 'moves' in RPGs is problematic. On the one hand, the use of conjunctions by the player (smash SO I can get to my car) and the OP (bash the monster AND get to their car) imply that TWO moves are happening here, so the GM's response by making the player choose has its own logic. On the other hand, as a person who did karate in Japan for years, there is no such thing as 'clean' one for one moves in combat. Fighting for your life is messy, and you can end up on the winning (or losing) side and have little recollection of the flurry of moments that got you there.


Second, I don't see much difference between PbtA's moves and D&D Feats. Both use pseudo-narrative set moves to simulate and create a vibe at the expense of player choice.

The OP continues, "So, in the name of abiding by the simplification of player action down to a set of "moves" (as they're called in Powered by the Apocalypse games) the rules - through the above text, if nowhere else - advise the game master to force a player to change his character's action?"

I dunno, this sounds exactly like 3e on D&D Feats in the few 4e games I played, which were a limited selection of 'kewl powers' that did the same amount of damage as everyone else's powers, but stifled how I could use my character. This stood in big contrast to the D&D and CoC games I played in the 80's and 90's, where the sky was the limit for action choice, but you had to abide by how much you could reasonably do in a round, and also accept the chance of failure if your intended action was complex.

This difference implies that the way a game system structures combat shows different ways of managing a move, a difference reflected in the OP's suggested solution to the problem, which is as follows:

"In Call of Cthulhu for example, the Keeper could just tell the player: "You'll have to make an attack with the baseball bat - if it hits, it won't do any damage but the path to get into your car will be clear. If not, you'll be stopped and stuck fighting the creature." The decisions are all up to the player at this point - instead of forcing her into a situation where she had to revise her action to stick to the structure of the rules, the game (by way of the Keeper) has given her the options and let her decide on the course of action."

This solution simply exchanges the unfavored choice (fight OR get to car) their own favored choice (hit to escape OR failing that have to fight), but doesn't do away for the logical necessity for choice. The fact that the OP has switched to a system (CoC) that has neither moves like PbtA or Feats like D&D also implies that system is not the problem.

This brings us to the real issue here: the different way games are designed to handle action, and how this impacts on player and GM expectations for combat.
This difference in expectation (as inculcated by the system you're used to) was brought to my attention when I GMed Swords of the Serpentine, a Gumshoe fantasy RPG and story game last year. One player was an inveterate D&D DM, and had made a bog standard D&D thief in a game that doesn't reward that type of character (ie there is no money in the system, or link between XP and gold). The PC was hanging over the side of a boat sneaking up on pirates,when the player stated "I want to swing up, land on deck, throw a few shrikes, draw my sword and jump into battle."

"Ummm, no" I replied. Half the players were incensed I was blocking the player's (very D&D) kewl moves in a supposedly empowering story game, while the other (older) half were on my side that the chain of actions was preposterous considering the situation.

First, we have the 'Pathetic aesthetic' of old school games vs the rule of cool of newer games. When I played OD&D back in the 80's and 90's, it was one move a round, a very literary way to represent action, and understandable considering the literary inspiration (Tolkien, Moorcock, etc) most of us based our imaginings on.

Later D&D editions switched to cinematic mode of action, with multiple actions and feats, which I surmise reflected the growing popularity of and exposure to video games. My little 4e experience was like playing a CRPG on paper, and as frustrating for a grognard like me as it was fun for the twenty somethings sitting at the table with me.

So just as both story games like PbtA and traditional RPGs like D&D can have shorthand moves or feats that limit choice, both new and old games can either allow multiple cool actions or limit to one based on whether they are emulating modern sources such as video games, or older inspirations such as pulp fantasy novels.

Regardless of system, players and GMs need to agree on the mode of action (literary or cinematic) and either choose systems to match this or tweak their system to do what they feel is right.

Posted by Tedankhamen at 8:02 AM No comments:

I'm reading the Alien RPG by Free League between teaching online classes and time spent with sonny while he's at home from school. 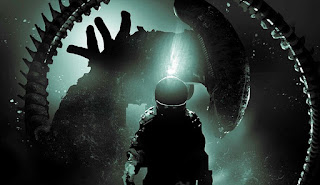 It is brilliantly done. The art alone makes it worth the price of admission - kind of like those old Ralph Mcquarrie concept art books for Star Wars that made you wish the films had looked that badass.

I had an idea of making my own Alien RPG on an OSR chassis, but alas it has been a busy first 2 years as prof. My concept was as follows:

1) An Alien RPG needs easy chargen and lethality
2) It needs story elements that subvert or short circuit the cruelty of the dice
3) It needs a great take on the setting, which I called 'Corporate Space'

Free League has accomplished it all, and much better than I could have.

Although I'm not near finished reading the tome (it is my cool down read between work and child rearing), here are some of my thoughts, good and bad:


Whereas in other story games like GUMSHOE extra die pools empower PCs, as befitting the horror genre, this empowerment comes at an awful price in Alien. If things keep getting worse, this can lead to Panic, or loss of autonomy. Losing control is a hated fate in RPGs, and so leveraging this meta-fear for a horror game is very apt.


If there is one complaint, it is that Free League have followed the canon too closely in some places, but missed useful tropes in others. Here are a few suggestions to spice the game up. Please note that I haven't finished reading the game as I mentioned, so they may have patched these up later.

The inclusion of Starbeast, a tell-all about the events of Alien 3 (ewww) that has become a banned book spreading stories across the frontier, is brilliant. However, I'd change it to Starbeasts, with stories of all kinds of aliens covered up by the corporate states, and have anyone caught reading it dismissed as a conspiracy nut, or else threatened with legal action or dismissal from contract. On the other hand, the book might allow a small bonus to Observation rolls about xenomorphs.


I haven't gotten to the android rules yet, but if there is one rule they need to follow, it is their inability to use firearms. From Ash to David, to the chrome heads of Alien: Isolation, synthetics are scary enough without firearms. Add to this they are often overlooked as mere servants and, like David from Prometheus, and are in control of the ship, its life support systems, as well as able to beat down the average human, then androids are powerful enough, so should stick to this rule. Unless you need some badass synth killers for the Weyland-Yutani security teams.

Throw in a twist


As much as I love Alien and Aliens, in terms of horror and terror, the franchise is an example of diminishing returns. The producers of its sequels seem to think making the alien bigger and badder each time works to keep it 'fresh'.

What works in horror is surprise, and the sudden powerlessness this instills in those who must face it.

For example, the sequels and prequels have hammered home that the xenomorph doesn't speak, but is just an animal, a perfect organism. However, in the original Alien script, after Ripley dies and the titular monster took over the controls of the lifeboat, it then speaks into the communication system at the end, calling out for other ships to rescue it.

Throwing in a twist like this means throwing out canon, but is the best way to keep players interested and on their toes.

Just imagine if a bunch of PCs is marooned on a mining asteroid with huge amoebas oozing from the walls and picking them off. Then a voice over the PA or commlink starts giving them directions where to go and how to get to safety. They follow the instructions and breathe a sigh of relief as they enter the airlock of a rescue ship only to see the talking alien behind the controls.

Throw the players some surprises. Chuck in the Predator, the Thing, Silent Running, whatever, but make changes that are both unsettling and threatening.


Alien and Aliens are known for their unforgettable characters, from Ripley and Ash to Hudson and Vasquez. What follows is a table that gives suggestions for unique characteristics for characters. Since the system uses only D6, that is all you need for this table.

What makes your character unique?