Originally, I had posted this as a proposal for a Mass Combat system. However, JB rightly pointed out the elegance and simplicity of the old Stormbringer POW save to survive mass combat and avoid unnecessary dice rolling. That is the fun of posting things like this. You get to go back and rethink and rediscover the games you love, and hear opinions from people who share that love, but see things a little differently.

I think both the system I propose and the old, elegant POW save have their places. For example, if your PCs are leading a squad sneaking into an enemy fortress, you might find my rules useful. If you are caught in the city while armies clash about you, JB's praise of the old rules makes perfect sense.

I'd like to get past combat hacks and move into the big picture. I always felt there were two gaping holes in the old Stormbringer game:

1) Lack of a squad combat system.

2) Lack of mechanics governing the struggle between Law and Chaos

Today, I'll try to figure out the first of  these two, and tackle the second next time. 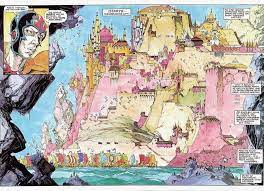 Mass combat was basically dismissed as for 'fighting fools' in Stormbringer, and the two methods for resolving them given below simply handwaive the outcome of the conflict, and only determine the survival of player characters. 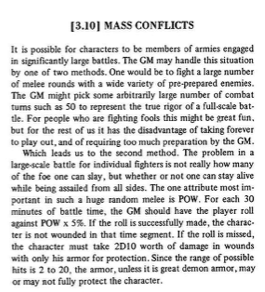 I find neither of these options satisfying, as large battles that put the heroes in the thick of the action are a staple of the Elric books, and indeed all of Moorcock's fiction.

Instead, I would implement the simple rule hack of using unit types as characters. Simply use the stats of a member of each unit fighting as an extra character. If numbers are unequal, the greater number gets an extra attack per multiple by which they outnumber their foe. Also, cover or good terrain should also give an extra attack, serve as armor, or reduce the to hit roll or attack numbers of the enemy. Damage is recorded as normally, but when either side is reduced to zero, this simply means one member of the unit is slain or defeated, and thus Hit Points return to full to signify the next combatant stepping into the breach.

For example, if Elric is leading a band of Melniobneans against some pirates attacking Imrryr, he and the pirate leader are the main characters in the conflict, while the Melnibonean warriors and pirates are the secondary unit characters. If the pirates outnumber the Melniboneans 3 to 1, they will get 2 extra attacks. However, if they Melniboneans are on a fortified battle barge against wooden ships, the Gamelord can reduce the number of pirate attacks.

The Gamelord should decide in advance what the victory conditions are, based on the situation and stakes of the conflict. Fanatic enemies will need to be defeated to the last man, while desperate or poorly motivated troops may break ranks and flee when their numbers are reduced to half.

This simple hack can be ported to other Chaosium games. Imagine the fun of having your investigators in Call of Cthulhu accompany a squad of the 1st Bombay Grenadiers on a raid against Thuggee cultists. 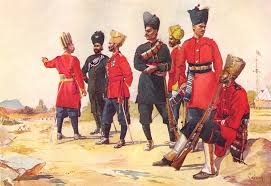 Posted by Tedankhamen at 8:25 AM 2 comments: 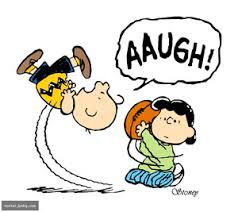 My original Stormbringer game fizzled because the heroes fumbled poorly when trying to burgle a fat apothecarist and his 2 guards. One character broke his greatsword, another shot an arrow into a comrade. Since then, I have used fumbles sparingly, and often ask players what they think should happen.

"Any game (be it D&D/PF/WFRP/Runequest) ran by Joey:
Joey: This is a heroic campaign. You'll be mighty warriors of peerless skill and stuff of legends.
Also Joey: We're playing with my critical fumble house-rule meaning that every time your PC attacks and rolls a nat 1/below 5%/snake eyes they hit themselves or a nearby ally for full damage.
Folks, whatever you're doing, don't use fumbles. Failing hysterically at something you're supposed to be good at 5% of time just isn't heroic. If you want to use it, call the game slapstick comedy and not saga of legends."
How about instead of a BAD thing happening to the PCs, which detracts from heroism and imperils the shared story, we let a GOOD thing happen to the bad guys. Namely, for every fumble rolled, the opponents can turn one miss into a hit. Since PCs are usually well armed and armored, this heightens the tension and challenge without turning combat into comedy.
What about the reverse? Maybe give the PCs a free attack, or let them have some minor advantage they ask for (ie free retreat from combat, or time to grab an item, etc).
Anything is better than just fumbles.
Posted by Tedankhamen at 5:42 AM 1 comment:

It looks like these little bonsai-style snips at the combat system are my entry into re-constructing Stormbringer. I'll continue in this vein with signature weapon attacks.

Now in the old game rules, the only signature attack was the riposte. The rule goes like this: 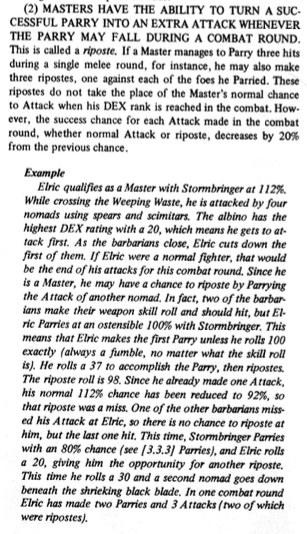 Although the rules do not specify what weapon this is for, ripostes are generally associated with swords, and the example given is of Elric using Stormbringer. So for this installment, I'll try to construct a number of signature weapon attacks based on the Riposte template.

Now, I don't want to make a bloated list of special feats or attacks that turn this into D&D or a PbtA game. Sure there were feints, hooks, trips, and a plethora of other techniques common to all weapons. Instead, I'd like to propose one signature move for each weapon type, based on the template of the Riposte, to give flavour to the game and some options for players.

Let's review how a Riposte works:

2) In combat, if the character makes a successful Parry, they can then Riposte (counter attack).

3) Consecutive attacks incur a penalty of 20%, whether they are Attacks or Ripostes.

So a template for a signature weapon attack has to have the following:

Here are my creations:

SWORDS - Riposte (as above)

Riposte as above. When a character parries successfully, they may also make an attack roll.

3) Limits: Minus 20% penalty for each consecutive Attack after the first

On a successful attack (ie successfully rolled and not successfully defended against), an axe can Cleave a weapon, armor, or unarmored limb.

NB: Magical weapons can only be cleaved by magical axes.

Count Baldhead is fighting a Melnibonean guard at the Sack of Immryr and decides to use his Sea Axe (2d6+2 plus bonus of d6) to cleave the Melnibonean's plate (d10+2, so maximum reduction 12) to allow his comrades to finish the foe. He rolls 4, 5, and 3 on his dice, for a total of 14. The Melniobnean plate is destroyed, and now the guard has only his greatsword to defend himself against the reavers.

On a successful attack, an opponent can be momentarily stunned or staggered with a ringing blow.

3) Limits: If the foe is unarmored, on a successful attack, damage is rolled but applied to CON. If CON is reduced to zero, the character is Knocked Out for d8 turns, minutes, or hours depending on what suits the situation. CON is restored to full when they awake. If the character is not reduced to zero, he or she is Staggered, and can only defend and move at 1/2 speed until their CON recovers to full. CON recovers at a rate of 1 CON per round.

NB: The attacker can choose to forego the Stagger and just do regular damage on a hit.

Example: Zarzonia is captured by pirates, but has escaped her bonds and smashes one in the head with a water jug when he comes to feed her. It is a surprise attack and her player rolls a critical success, doing 12 damage total. This is greater than the pirate's 10 CON, so he crumples in a heap at her feet.

On a successful attack, an opponent can be pinned to a wall or the ground.

NB: The attacker can choose to forego the Pin and just do double damage on a critical hit.

Rackhir fires an arrow from his desert bow (d10+2 plus d6 damage bonus) at a group of clakar attacking him and Elric. He rolls a critical success, then rolls a 7 and a 3, and so both does 12 damage to the creature, and forces it to make a STR roll minus the damage to escape. The clakar's STR is 14, so this is reduced to 2 for attempt's to escape in following rounds.

On a successful Attack against an unarmored opponent, the attacker can roll to attack again until they miss.

3) Limits: Minus 20% penalty for each consecutive attack after the first.

The King of Beggars is defending himself against an assassin disguised as an urchin, and scores a successful hit. He rolls damage, then rolls to attack again. Another success despite the 20% penalty, and so more damage is done. He scores yet another success on his third attack roll, despite the now 40% penalty, and the damage is enough to finish his would be assassin.

What Do You Think?

How were these signature moves? If you have any suggestions or comments, please leave a message.

Posted by Tedankhamen at 7:54 AM No comments: