So I am re-watching the original Ghost in the Shell. It is epic. A masterpiece. 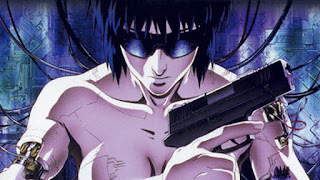 I just finished the first fight between the Major and the ghost using high velocity bullets. So many concepts (brain-wiped goons, throngs of people, abandoned quarters of the city) are crammed into this one sequence. More than that, the environment is depicted as a major factor in the combat, as it should be. 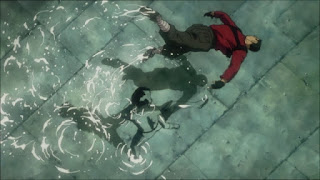 To replicate this in my games, I've brainstormed a few tables. A good GM should make a few rolls and determine the combat environment and interpret it for the players. Feel free to disregard or preroll conflicting entries (ie school zone billowing smoke, unless this fits your dystopic future). 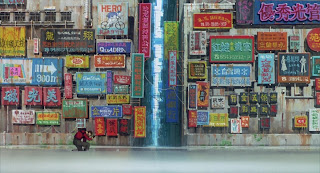 1 Sewer. Endless tunnels below the city, huge architecture, deafening echoes and running water, startling vermin.
2 Public transport. A monorail or subway, cramped quarters, good for taking hostages, or blowing up.
3 The docks. Boats and ships to jump between, deep ocean to fall into, sandbars to kung fu on.
4 The factories. Chimneys to climb or jump from, gantries to clomp across, chemical tanks to walk around or shoot holes in, pipes to hurdle or rupture.
5 The canals. Little boats to overturn, footbridges, knee deep water, fish swimming among rusty bicycles and consumer society detritus.
6 A shopping arcade. Shoppers to shove aside, displays to overturn, noisy pachinko parlours to run through, spilling hundreds of little balls behind you.
8 A park. Green spaces and trees to hide behind, civilians to scare or take hostage, duck ponds to splash through, fountains to blow up.
9 A residential area. Houses to barge into, stop signs to chop down or blow past, chest high concrete walls to leap or plough through.
12 Rows of concrete apartments. Roofs to leap between, exterior stairwells to climb on, cramped apartments to blunder through.
13 Parking lots. 50% either cars to crash into or duck behind and fire back from, or else heavy industrial vehicles, cranes and trucks that you can shimmy under or hunker behind.
14 School zone. Uh oh, kids gawking, police boxes on the corner.
15 Highway. Cars and trucks to dodge, or carjack, ramps to jump up or down to, good to parasail off of.
16 Traditional temple, shrine, or palace. Quiet, moss covered, dripping water and clacking bamboo pipes, perfect for silent showdown.
17 Private grounds of a corporation or embassy. Hedge walls, sudden sprinkler systems, security drones with machine-guns.
18 High rise building. Plexiglass to shatter, elevators shafts to fall down, climb up, or throw people into, boardrooms and reception desks to shoot up.
19 Laboratory or computer server room. Climate controlled, needs enviro-suits, fills with deafening alarms and security bots during a disturbance, blast doors also clamp down. Everything that happens is recorded on security cameras.
20 Air strip or space port. Big metal vehicles to hide behind or jump onto as they taxi for takeoff. Security forces arrive quickly - no one wants a terrorist incident.

3 Deafening roar from machinery, vehicles, or people. Forget listen rolls, easy to get surprised or surprise.
4-5 Loud area, can't hear for shit. Communication only through yelling, gives away your position.
6-8 Loud enough. Can hear if enemy makes a big ruckus, otherwise as pervious entry.
9-12 Normal background noise. You might hear them if you stop everything and listen, then get a lucky roll.
13-15 Quiet. Failed listen roll gives you general direction, a success lets you pinpoint it.
16-17 Very quiet. You can hear each other easily, and pinpoint location with a successful listen roll.
18 You can hear a pin drop. You play cat and mouse game of listening to each other's movement, skulking about, then re-adjusting position before striking.

3 Jam packed, can only inch forward, bystanders going to die if shooting starts, easy to blend into though.
4-5 Highly populated, you need to yell or push people aside to advance, but slows you by half.
6-8 Clumps of people milling about. You can run between people if you make an agility roll, otherwise as above.
9-12 Normal, people are witnesses, but not in the way.
13-15 Quiet, 50% chance 1-4 people are around if shit goes down.
16-17 Silent streets. Only 10% chance of a single guard or wanderer on scene when action happens.
18 Abandoned or cordoned off area. No one but us and them.

3 Nothing. Guess you have to stand and juke the shots and hope you get lucky first.
4-5 Shit all. Cover only if you crawl on all fours and hide.
6-8 Kiddie cover. You have to hunker down to get any protection.
9-12 Decent. You can stand and shoot leaning around corners.
13-15 Great. Lots of strategic places to get a good shot from if you take a minute to set up.
16-17 Cover cover everywhere. Alternately, hard to get a clear shot at anyone. Everyone has half cover automatically.
18 Too many places to hide and hunker down. Better use your ears to find your foe and sneak up on them.

3 Heavily armed and armoured. Power armour or mini-mech, military grade weapons do 1 shot kill damage. Need to use the terrain and your wits if you want to survive.
4-5 Cyber psycho, 2/3 or more cybernetic. Tough slog head-to-head, needs strategy and heavy weapons to bring down.
6-8 Cyberpunk, 1/3 or more cybernetic. Tough, but can be outwitted and outgunned.
9-12 Combat trained, one implant useful for combat, assault rifle or SMG. Typical guardsman or police officer.
13-15 Trained, fully human. Your gear and implants give you the advantage, but they might have numbers.
16-17 Fully human, but with minimal gear, bulletproof vest, 1-2 reloads. They come in numbers, can be sent packing with a show of force or brutality.
18 Puh-lease. Rent a cops or poser boys, low impact weapons with no reloads. Will run at the first sign of being outmatched.

3 Mega passenger plane slides slowly overhead.
4 Giant billboards for old products stand rotting away.
5 Crowds of school kids in uniforms rush by.
6 Traditional festival parade marches by, people in loincloths chanting and lifting a portable shrine.
7 Robot vending machine starts its routine on PCs.
8 A 3 wheeled mini truck blares out advertisements for noodles, baked sweet potatoes, or recycling.
9 Motorcycle punks drive slowly by, revving engines, waving flags, and trying to make eye contact to start a brawl.
10 A politician on a speaker van drones on about his platform while commuters flash by unheeding.
11 A giant hologram Godzilla stomps by, bellowing out an ad for candy.
12 A crane stalks fish in a canal.
13 A line of taxis idles while drivers either sleep inside or chat while smoking.
14 Masked youth spray paint revolutionary slogans on the walls.
15 A riot police armoured bus drives by filled with cops in full gear.
16 Kids in VR helmets chase each other about shooting at each other with fingers and yelling ZAP! BEEYOW!
17 A homeless man with a cardboard sign sits staring at space.
18 A begging monk stands chanting, cup held out for donations, wicker hat obscuring his or her face.

Posted by Tedankhamen at 5:49 AM No comments:

Well, in case anyone ever reads this blog, I am alive.

I've survived my first year as prof. One more day of classes then it is just meetings, research, and free time till April.

1) I hope to get my backlog of posts finished and out. Lots of aged fantasy stuff, but also newer Cyberpunk material. Maybe ever some Weird Japan or Chanbara support. Art?

2) Actual play reports (gasp!). I hope to run Swords of the Serpentine (by Pelgrane, whose play test I've signed up for), as well as Spirit of 77.

I actually sat in on a session of D&D 5E last week and had a blast. The character they assigned me didn't do much (he played the fiddle while others fought goblins, and no, not a bard), but it was fun just to be at a table.

It has inspired me to create the following house rule:


In combats for D&D or similar one roll to hit games, when both sides of a combat miss each other (commonly called a whiff), the higher roll (after all modifications) is considered a hit and damage is rolled.

Note that players on the receiving end of damage under this rule might cry foul, so before implementing this change make sure 1) all players are onboard with it and the reasons for using the rule (ie to speed up combat), and 2) they are aware of and accept the fact that they are just as likely to get a hit as they are to give one

Posted by Tedankhamen at 4:49 AM No comments: