Whew, what a month it’s been! In addition to teaching full time for a uni that thinks instructors are free as birds to do extracurricular activities of dubious educational merit, I’ve settled into the 4 hour daily commute and somehow finished the 80 page third chapter of my thesis. All the while being a loving husband and father, but admittedly my baby boy’s smile and the wife’s support were the only things that kept me going.

Not looking forward to the final deadline for the 300+ page opus in November, but it’s got to get done.

Now it’s time to blow out the cobwebs, read some good novels (starting with Hugh Howey’s ‘WOOL’), write some fiction and gaming stuff, and hopefully do some gaming (if you’re there Sunglasses Jerk, make it happen!).

Without further ado here is my first post back in the saddle for your fantasy game.

Words That Don’t Exist In Common

DWARVISH
Fraubarbicon – The moment when your wife’s beard intertwines with your own.

“I missed the departure because of a frubarbicon, but luckily I caught up with the party just as the goblins started their ambush and bushwhacked those bushwackers!”

ELVISH
Nuquerna Laisi – Deciding to change to a radically opposite alignment and/or class due to boredom with centuries of championing the same cause.

“You think I, Alyahs the Necromancer, killed Shayla the Championess of Isis? Foolish mortals! I WAS Shayla of Isis!”

ORCISH
Chubash chubash – A leader that is inept but is loved for their commitment towards violence and hasty ill-conceived action.

“Our charge on the knights broke our ranks and killed half our soldiers, as well as Chieftess Grokilla. She was true chubash chubash –never see the like again!”

HALFLING
Firdidlong – A day spent smoking pipeweed and drinking beer in a field while getting paid to do so. Considered a high cultural ideal.

“I had always successfully avoided work with the town militia or guards until one day my uncle Figtoe volunteered me. I was right angry at first, until I learned our mission was a complete firdidlong!”

TROLL
Urk flam dang iya! – Taking so much regenerated damaged that you would have preferred the fire.

THRI KEEN
T’chik chik BLAT – A human(oid) so infuriating you wish you wore shoes so you could squish them.

NEO-OTYUGH
Burble urp de livre – The euphoric feeling of bathing in liquefied feces all day while reading a good book.

“Burble urp de livre is nice work if you can get it, but most privies under castles nowadays offer only the hardest rain of excrement pellets and at best a few soiled pages of the Farmer’s Almanac.”
Posted by Tedankhamen at 7:52 AM No comments:

Took a break from the thesis to walk around Kyoto a bit.

Got quite the rpg haul from Book Off, the big second hand bookstore. 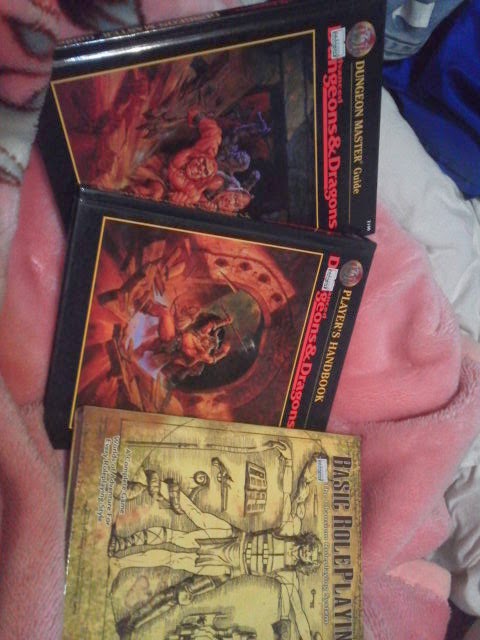 This should motivate me to make the last spurt and get this chapter done by the deadline at month's end.

Posted by Tedankhamen at 7:13 AM 4 comments: