Lovecraftean horror has reached peak saturation in RPGs. However, except for possibly The Yellow King RPG from Pelgrane, I don't see much new being done.

(Disclaimer: I haven't played loads, so if you know of some groundbreaking Cthulhu mythos RPG, leave a comment).

There were moments where it felt like we were pushing the envelope, mostly after we hit The Dreamlands, but they weren't enough. In this post I'll take off the chocks and see how far we can push the genre. I wish I knew enough of other rulesets, but I'll stick with the old fallback Call of Cthulhu (CoC), pre 7th edition. 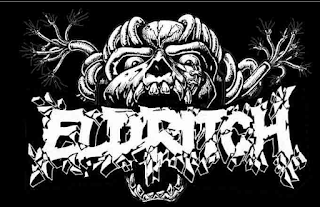 As the cosmic horrors bend and shape reality, so too should they bend and shape the rules. One of the things that got most tedious in our CoC game was combat, especially the myriad rolls to hit, defend, or do damage. Here is a table to return terror to combat by having damage done reflect the eldritch nature of mythos creatures.

2 De-aging -  Every point of damage is a year subtracted from your age. Stats cannot exceed age, so for example if you are reduced to 8 years old, no attribute can be over 8. Skills are capped at relative attribute x 5%, so an 8 year old's skills couldn't exceed 40%.

3 Alienation - Damage is taken from your CHA. Maximum social skills (Persuade, Fast talk etc) are CHA x 5%. For example, if you have a Charisma of 3, no social skill can exceed 15%. If your CHA becomes negative, it is used as maximum value for a SAN damage roll. For example, if your CHA become - 3, you can do 1-3 SAN damage to someone who fails a Sanity roll when interacting with the soulless void you have become.

4 Withering - Damage is taken from your STR. Maximum physical skills (Climb, Grappling etc) are STR x 5%. For example, if  you have a STR of 3, no physical skill can exceed 15%. A STR of 0 means you die from weakness, your body a strange limp jellyfish that incurs a 0/1 Sanity loss to behold.

5 Warping - Damage is taken from your DEX as your body is warped into horrific shapes. Maximum agility skills (Dodge, Dance etc) are DEX x 5%. For example, if you have a DEX of 3, no agility skill can exceed 15%. If your DEX becomes 3 or less, you are an invalid unable to stand. A DEX of 0 means you die from spastic convulsions.

6 Dulling - Damage is taken from your INT. Maximum knowledge skills (any science, language etc) are INT x 5%. If you have a INT of 3, no knowledge skill can exceed 15%. If your INT becomes 3 or less, you are a vegetable unable to control your body. An INT of 0 or less means you die from brain implosion.

7 Draining - Damage is taken from your POW. This affects Sanity and magic casting as per the rules. If your POW becomes 0 or negative, you become a ghost (see rulebook) and rise from the dead the next night to drain your former comrades.

8 Weakening - Damage is taken from your CON.  A CON of 0 means you die from weakness. If your CON becomes negative, you become a vampire (see rulebook) and rise from the dead the next night to slake your thirst from your former comrades.

9 Shrinking - Damage is taken from your SIZ. This affects damage bonus done as per the rules. If your SIZ becomes negative, you shrink down to the Quantum Realm and have to battle its horrors. A TPK might spawn an entirely new genre of play.

10 Devolution - The strange energies from the horror knock you down the evolutionary ladder. Damage is recorded as normal, but when HPs reach zero, the character transmutes into a lower lifeform (1d4/1d6+1 SAN loss to witness). Keep INT the same but roll all other attributes as per the rulebook. New form is (roll 1d6)

The player can continue using the morphed character, but with logical limits (ie no human speech, lack of prehensile hands, need to be immersed in water, etc). The transformation incurs a 1/1d6 Sanity loss to behold.

11 Mutation - The strange energies from the horror change you into something... else. (roll 1d6)

1 Gains horrific glowing eyes that can see into other dimensions or angles of reality, including normally invisible things. No protection against SAN loss.
2 Has a semi-transparent body immune to normal damage but taking double from mythos creatures.
3 Acquires movement that is out of step with reality, gains automatic dodge roll against any attack but fumble (00) means the PC slips into a crack in reality and is lost on other planes.
4 Becomes pale soul vampire, no longer requires mundane food but sucks POW for sustenance, needs 1 POW per day and an extra 1 for d6 healing.
5 Splits into two personalities, the normal good one, and a bestial alternate. Latter gains 1d to all physical attributes and doubles agility skills, but has unsatiable bloodlust, ie must kill in combat or daily.
6 Is a living corpse, immune to mental attacks, persuasion, gases, drowning etc, but also unable to use social skills and reeks of the grave. Can be destroyed by physical attacks.

The transformation incurs a 1/1d6 Sanity loss to behold, and 0/1 when seen thereafter.

12 Memory - Damage effaces your knowledge.  Choose a random skill and take damage from that. There is a reason Level Drain was so feared in D&D it was nerfed in later editions.

Posted by Tedankhamen at 7:41 AM No comments:

The lack of an Encumbrance system and the lackluster currency & price list of Stormbringer were always a bit of a turn off when I ran the game back in the day. In this post, I’ll propose a simple yet robust system for carrying objects, and punch up the coinage by adding a social class-based wealth system. Once again, my aim is to make simple rules that support gameplay.

The lack of an Encumbrance system was one thing that rankled my old D&D group when I ran the game. One player, upon learning about the chance of a weapon breaking on a fumble in combat, decided to carry around 10 longswords. “There’s no rule against it” he retorted.

Rereading the Elric novels, Elric’s strength and how much he can carry does become an issue at times, so I think an Encumbrance system should enhance the game.

In the section on demons, there is this rule about demons and weapon size:

“Putting points into SIZ establishes the size of the weapon. One point means a dagger-sized weapon, 2 points  gives a broadsword or battle ax size, and 3 points is needed for a greatsword.”

It is possible I filched this subconsciously for my encumbrance rules, as the scales are very similar. Regardless, here it is adapted and expanded for Stormbringer.

The weight and heft of items you carry is measured in encumbrance, contracted as ENC. You can carry a number of ENC points equal to your character’s Strength (STR). For every point that ENC exceeds STR, you lose 1 point of movement (MOV, normally 8 for humans according to the rules).

The ENC values for different items are as below:

2 ENC One handed, long or heavy (other swords, cudgel / self bow etc)

The GM and players should decide exotic or new weapons using these rules as a guide.

The GM and players should decide exotic or new armor types using these rules as a guide.

The GM and players should decide exotic or new shield types using these rules as a guide.

These are for objects held in the hand(s). Besides weight, this means the hand(s) cannot be used for anything else while carrying. The examples include a light source / a scholarly object / a liquid container / a solid container / a tool / a piece of furniture / and a musical instrument for each category.

Tiny or ultra light objects  (ie coins) count as 1 ENC for every number of the object held equal to the STR score. For instance, if you have 15 STR, you can hold up to 15 coins at no ENC cost, but 1 ENC from

For huge or ultra heavy things (ie a piano, a casket, a bed) the PC can only drag them around at MOV 1. Up to 3 other people can help move the object, each adding 1 MOV to its speed.

These cannot be moved. Trust me, a player will ask…

When objects are stowed away in containers, they are counted as half ENC. If you have STR 15, 15 coins in your hand count as one ENC, but 30 coins if put in a purse.

Above all, use common sense and fairplay when deciding on encumbrance not covered by these rules.

Money is usually something I handwave in Basic Roleplaying (BRP) games, such as Call of Cthulhu. However, Stormbringer is after all a pulp game, and so the lust for wealth is a huge part of the genre. When Elric and Moonglum inadvertently destroy the Dead Gods’ Book, they still scrabble for the jewels that encrusted it, "each one worth a fortune" 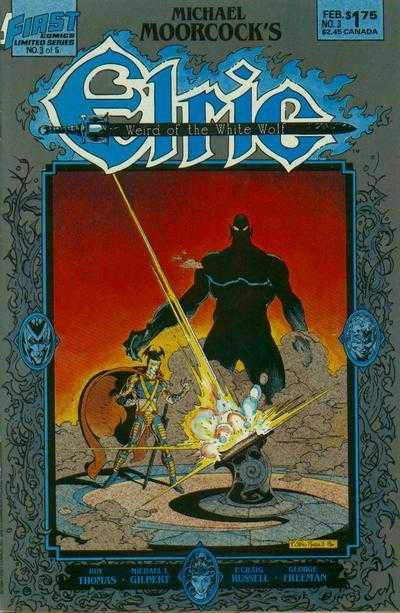 As will be explained in a forthcoming section on Professions & Skills, different professions can make income at a rate equal to their intelligence (INT) per month.

Note that this introduces inequality into the game, but that also fits well with Moorcock’s fiction, in which beggars and kings fight over their different corners of the Young Kingdoms.

In this system, a Beggar of INT 10 makes a paltry $5 a month, a cleric of the same intelligence would make $100 (but have room & board covered by the church), and a Melnibonean noble would rake in $5000, mostly in trade and investments. This inequality gives characters of lower social status a motivation  to adventure in the hopes of gaining wealth and increasing their status. It also explains why characters of differing social levels to adventure together - the higher ranked employ the lower. This adds a pragmatic angle to character relations that encourages roleplaying through negotiation of risk and reward.

Dispossessed – Of course, this is not enough to live on, so these folk turn to crime or scams by necessity. A dispossessed person could impersonate a higher class to make more income, but would be vilified or imprisoned if found out.

Rural Folk – This represents the money they can save, but most live largely for free off the land.

Urbanites – If they don’t work, they lose 10% of their savings per month. City life isn’t cheap.

Clergy – Clerics generally have room and board covered by their church, but only make money when performing their duties.

Nobles –  Nobles have all types of legacy investments and savings, and thus working for them has a more leisurely meaning.

Royalty – Although their income may seem exorbitant, this represents the money they take in as head of state, and so much of it is poured back into the state coffers and infrastructure. A head of state absconding with this total amount would bankrupt his nation and be both reviled and hunted.

Posted by Tedankhamen at 9:27 PM No comments: