OK, it has been a week-and-a-half from hell, but work and studies have calmed down a tad so it is time to post away some stress.

This time I’d like to review the Dragon Half RPG, my contribution to Mesmerized by Sirens’ “Obscure RPG Appreciation” initiative.

When D&D first hit it was a global phenomenon, translated into tons of languages and sold worldwide. Its core concepts were also translated into other tongues and worldviews as local reimaginings of the game, sometimes losing and sometimes gaining elements as it mutated. Britain gave us “Dragon Warriors”, Germany created “Dark Eye”, while France offered “Epees et Sorcellerie,” all versions of D&D as seen through the lens of their creators’ own culture.

Further afield, Japan fostered many indigenous FRPGs, from the early wave of D&D clones like “Sword World” and “Lodoss War”, to more recent creative reimaginings like “Ryutama”. Living in Kyoto, over the years I have made a small collection of these Japanese children of D&D, and today I’d like to present one of my favorites, the 1991 Dragon Half RPG. 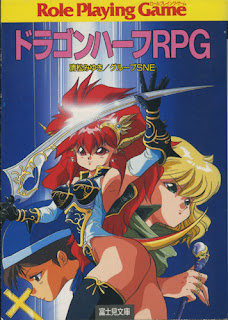 For those few who don’t know the name, Dragon Half started out as a manga then successful anime telling the story of Mink, a young girl whose mother was a dragon and father a lecherous dragon slaying knight. Mink is a spunky young girl with dragon strength, wings and a tail, who drags her friends along on a quest to see dragonslayer/rock singer Dick Saucer.

As you can tell from the description, Dragon Half has its tongue firmly in its cheek, overturning D&D tropes or simply following them to their absurd end. The art, although evocative and highly polished, is also highly sexualized, alternating gratuitous crotch shots and nudity with cutesy bobble-head style characters, understandable as the author Ryusuke Mita cut his artistic teeth in the lucrative world of pornographic manga, like so many animators in Japan. Still, the story is great, the humour is funny, and the laviscous art plays into both the fantasy and fandom aspects of the genre. 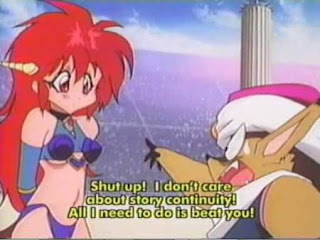 The RPG is in the pocket size format so popular in Japan, and while lacking the hefty tome feel of western rpgs, this small size belies a large 556 page punch. The writing is clear, the pages uncluttered and legible (if you read Japanese), and the art is top notch, as it is all taken from the manga. Contents include Ch. 0 Starting, Ch. 1 Character Making, Ch. 2 Skill Rolls, Ch. 3 Battle & Character Death, Ch. 4 Magic, Ch. 5 Character Advancement, Ch. 6 Special Rules & Addendum, Ch. 7 Equipment, Ch. 8 GM Section, Ch. 9 Making & Repairing Constructs, Ch. 10 Miscellaneous Damage, Ch. 11 Special Options & Rules, Ch. 12 Magic Items, Ch. 13 Monsters! The book has designer’s notes and useful charts at the end, and a character sheet stapled inside the front cover.

The rules are a simplified form of the Sword World RPG, Japan’s 1989 answer to D&D. Since the pages of damage charts and monster statblocks of Sword World make my head throb like a high school algebra test, I find Dragon Half’s pared down mechanics much more enticing. Basically, you roll 2d6 plus mods against a difficulty determined by the GM. In combat, there is the extra complication of a MSHAG-like table of damage results ranging from ‘Unharmed’ to ‘Destroyed’ and everything in between.

Having run a few simulated combats the system seems well balanced and eminently playable. Magic seems a bit underdone, with a very limited range of spells, which can be remedied by cribbing from Sword World if so desired. Skills are basically occupations like Princess, Thief, or Bard, and the descriptions are Risus-like in their brevity. In fact, a knowledge of Risus mechanics might be a serious asset for anyone interested in playing Dragon Half, as the Risus mechanics of ‘pumping’ skills and resolution could come in handy.

Just as skills are underdeveloped, the most glaring problem with the rules is the weakness of the Gag Level rules. Dragon Half characters become stronger as they advance in Hero Levels, which are basically synonymous with D&D levels. There is a parallel system of Gag Levels, however, which include unexpected great effects for failure and a ‘Gag Skill’ that you can fail spectacularly in, but without any real incentive or explanation of why a player would want to. Once again, the infusion of Risus rules to allow characters to ‘milk’ skills for success and pay this off in gag failures would seem a good patch for this lack of definition.

However, there are a lot of great, humorous touches in the game – all PCs are ‘halfs’, basically with one human parent and one of another species. I rolled a (boring) half-elf preparing for this article, but could just as easily gotten a half-vampire or half-mermaid if the dice had rolled a different way. All monster statblocks include an ‘Edibility’ rating, as a preoccupation with food is a staple both of the source material and Japanese culture (see the movie Tampopo).

There were three supplements as far as I know (BGG has the cover of “Labyrinth of Laughter” mislabeled as the gamebook on the BGG website), and all were filled with great art, funny descriptions, and ludicrous adventure. It would take a great GM and players who were fine with gonzo-style D&D parody gaming to get the most out of these, with a familiarity with the source material a must. If you like gonzo-D&D that is a mix of Paranoia and Adventure Time, then the Dragon Half RPG just might be your thing. 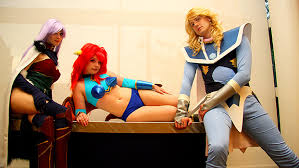 Posted by Tedankhamen at 6:56 AM