Ever Wonder Why Monsters are Bigger and Tougher the Deeper Down You Delve?


Monsters get bigger and stronger the deeper down you delve. Every adventurer knows this to be true, but few speak of it. 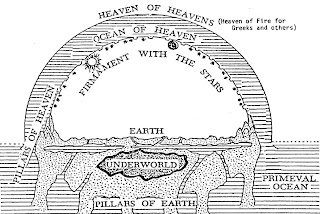 Capture a koubalt at the entrance to a cave or labyrinth, take it down a level or two and stake it there. A month later, you’ll have a g’noll. The same with an orkh – bring it a few levels lower and you’ll have an ohger. Whole parties have been massacred by giant beetles they unknowingly brought in their packs, or spiders.

No one knows why this happens, and why men and their fellows are immune. I’ve heard at least a dozen theories, though.

1 The old scrolls tell of radioactive ruins of pre-cataclysm civilization that lie in the darkest depths, the eldritch energies from their broken war-engines permeating the subterranean environment and changing its denizens.

2 Actually, I read that an antediluvian meteor created the crater that later became the dungeon, and brought with it an alien microscopic spore. The spore colony is still buried beneath the tunnels, and is the epicenter for these mutations.

3 Fools! At the bottom lies a hellmouth from which all these monsters are spawned, and as they recede from it so too does their infernal power diminish! Going back they replenish themselves and take on stronger forms.

4 Horsepiss. A dreaming god lies forgotten at the bottom of the dungeon, Its dreams invading and warping reality more the closer you approach to where It sleeps. If you find It, you’ll get your greatest wish granted.

5 Nah! A sage told me there’s a gateway to another dimension at bottom, and what is evil on this side is good on the other and vis versa. Monsters and demons on this side are transformed angels and fairies from the other.

6 You’re all wrong. The ancient unknown builders used non-Euclidean geometry to make the maze, and it distorts reality by amplifying monsters the closer they get to the center.

7 You’ve got it backwards. Deep dwellers are actually normal – it’s the sun that distorts and weakens them. They get their power from the anti-sun at the center of the world, which replenishes them when they near it, just as our sun sucks the life out of them. Just like vampires.

8 If you’d studied natural history you’d know it is simply a polymorphic side-effect of abiogenic underground gases which makes lower lifeforms like worms and rats spring from the earth. It’ll warp you too if you’re down there long enough.

9 Well, I heard from an old dwarf that mystic crystals lie in the depths, and their vibrations cause the change. That’s why all adventurers carry dwarven charms and metal, to throw off the harmonics and stay unaffected.

10 A cleric told me that the crucibles of the gods, where they begat Life, still lie scattered deep in the earth. A crucible rejuvenates whatever creatures are aligned with its maker, so whatever god left his crucible down there must have been a nasty one.

11 Everybody knows that underground time flows in reverse, and these monsters are just regressing to primitive leviathan state. It’s why all adventurers stay looking so young.

12 Nah, it’s all in the mind. As you get into deep darkness, your other senses and powers heighten, and these creatures are psychically beefing themselves up to face the terrors of the abyss. Just ask a psion.
Posted by Tedankhamen at 8:41 AM