In a very real way, Lovecraft is dead. 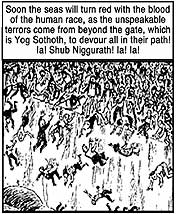 From a Ghostbusters cartoon episode to plush toys to anime, Lovecraftean has almost become a pastiche of itself. The Cthulhu Mythos has jumped the pop cultural shark. Sandy Peterson is making supplements for D&D, a heroic system that is the antithesis of the helplessness at the heart of cosmic horror.

In this context, it is easy to see why Call of Cthulhu (CoC) games seem largely relegated to Haloween one shots and abortive campaigns.

But it doesn't have to be that way.

I just ran my 11th session, with no end in sight. Players seem excited to see what happens next, and keep asking about the next session.

How did I reanimate Lovecraft? Here are a few tips:

1 Explore more than the mythos.

Players have mostly read some Lovecraft stories, or thumbed through the rulebook. This takes lots of suspense out of the game. Add some mystery by including factions not described in mythos fiction or game material.

For example, our PCs discovered the ruins of a moon base put there by antediluvian humans with an eye in their foreheads. Who were these ancient 3 eyed hominids? I'm not sure I know myself, but listening to the players muse about their origins (and generate ideas for me) is a hoot,

2 Roll with their punches

Our game began with an old professor friend who had made an 'exciting discovery' in the desert getting kidnapped by a Latino gang in El Paso. After a rescue of the professor, the PCs planned an executed a daring raid on the gang HQ to retake the MacGuffin.

At first I balked at their D&D-style heroic plans, but I let them have their way and they carried it off. By rolling with the punches, a Keeper lets the Players know they have freedom to act in the world. Speaking of freedom...

Just like D&D is dull and demotivating if PCs never see dungeons or dragons, Call of Cthulhu gets boring if it is just a haunted house, monster-of-the-week exercise. In our game, PCs have visited the Tennger tribe in Indonsia, and spirit walked inside the deadly Nepalese peak Annapurna. Just before we went on hiatus for the summer, the PCs had arrived in the Dreamlands, and were busy interacting with the cat people of Bast's city. They also learned about our next point...

4 Allow some light to creep in

CoC is known for magic powers that come at a great price, spells that degrade your Sanity so much they are not worth the trouble.

I've introduced other powers with less drawback to the game. One PC learned a simple Psionic power from indigenous people, as well as how to summon cats in the Dreamlands. Another has a magic weapon found on the aforementioned moon base, and is studying 'the Cat Dance' (a form of auto-dodge with limitations) from catfolk. This adds a whole new dynamic to the game, which is strangely in keeping with the Dreamlands.

These are just a few things that I feel are contributing to the longevity of our game.

Posted by Tedankhamen at 9:22 AM