So, I just picked up these two iterations of the Stormbringer rules at a good price, as I have no intention of paying hundreds for an older edition. (NB: If you have an older edition you want to get rid of, drop me a line) 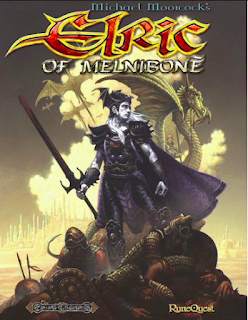 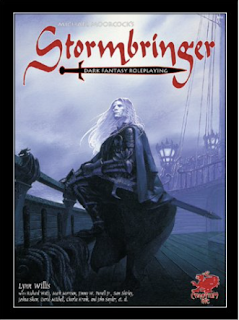 The Stormbringer (2001) looks nice on the outside, but is a bit blocky and amateurish in both text and design on the inside. It is basically a reprint of the Elric! stuff, which was a neat update of the old game, but packaged with heroic character sketches to appeal to the younguns. Elric of Melnibone (2009) is a beautiful book, and finds its own niche and charm.

But both books show the difficulty in keeping Stormbringer alive.

WHY THE MAGIC FADED

First, with the 40+ year old Elric novels, young gamers do not know the source material, and so publishers try to appeal through art and languid summaries of Moorcock's fiction. Such summaries read like those click bait stories you see about the 'secrets' of some well known but older IP such as Alien or Bladerunner. At my age (50), you read one or two entries before you realize you know more than the writer, and that there is no point in further reading.

Second, Stormbringer never really mechanically tackled the struggle between Law and Chaos. Oh sure there was the allegiance system, where player characters can become Agents or Champions of their divine patrons, but this was more a way to empower PCs through a hybrid of D&D's alignment and experience systems. I think this lack of mechanism for replicating the struggle is why many old scenarios were just dungeon crawls, such as the old "Tower of Yrkath Florn" that came in early editions. There were scenarios that touched on the struggle, such as my favorite "The Hall of Risk", but again these were without any mechanical underpinning. Newer materials such as "The Struggle Against Pan Tang" also miss the point of the series - the squabbling between nations means nothing in the face of the apocalyptic struggle of the Lords of Law and Chaos Gods.

Just as the struggle between Law and Chaos is the center of the Elric novels, the lack of a system for determining the moves of the factions in the eternal struggle between Law and Chaos has lead to the growing irrelevance of the game. I think adding such a system would make the game stand out from the crowd of fantasy heartbreakers and retro clones, and make it more faithful to the source material. In terms of player satisfaction too, Stormbringer has often lacked clear win conditions. There is no experience system or levels like in D&D, and money is not an object. Essentially, PCs should be working to save (or destroy) the world amid the struggle between forces greater than themselves.

I think any other focus for the game, such as the rise of the Young Kingdoms versus Melnibone hinted at in the Kickstarter ad HERE, is doomed to failure, or at least continued ignominy.

At the beginning of any scenario, roll on the following table to see what is happening during the struggle at this time. Basically, the scenario becomes the A plot of the game, while the struggle between Law and Chaos becomes the B plot or metaplot. The faction turn thus represents a god of Law or Chaos making a gambit to increase the power of their faction.
Descriptions are necessarily brief and vague, and it is up to the GM to use them as inspiration to devise details themselves.

Way of Contacting or Entering the Plane (roll 1d8)

1 Holy war
2 Piracy or banditry
3 Assassination
4 Fomenting unrest
5 Sabotage
6 Siege
7 Embargo
8 Coup d'etat
NB: A Player Character who is an agent or Champion may decide to create their own move by enciting one of the events above or assisting in one.

The easiest way to score the struggle between Law and Chaos is to count how many nations are held by each power.

In the Young Kingdoms, the Lords of Law and Chaos fight over 20 kingdoms. According to my reading, the Elric saga starts with 5 nations aligned with Chaos, 5 with Law, and 10 with the Balance, albeit implicitly, as follows.

There are three conditions of the world:

If either Law or Chaos has a greater number of aligned nations, but their combined number is less than that of nations in Balance, then the world is out of Balance. In this case either side can use squads of adherents to further their aim, and require some effort to stop. Also, the Balance may send individuals to assist in returning the world to Balance.

If the combined nations of Law and Chaos exceed the nations in Balance, the world is said to be Ascendant. Either side can send great armies or forces magic or scientific to further their aims, and will try to take over nations of Balance while fighting directly or indirectly against nations of their adversary. Only great struggle and sacrifice can return the world to Balance.

One thing that always struck me as strange in Stormbringer was how anyone could be an agent of a cosmic faction. In the books, only those with power, as reflected in social status, became agents. Emperor Elric, Prince Gaynor, the Sleeping Sorceress, all are leaders of men and the top of their society. There are no hunter, farmer, or beggar agents of Law or Chaos.

Agents thus can only come from the top of society - Nobles, Sorcerors, or Priests. Exceptions might be for a god of wealth, who has merchants as Agents, a nature or elemental god who could choose a hunter, and a Craftsman who could serve as a champion of Law. Each Master can devise their own special Agents.

Which begs the question, why are lesser professions playable at all? Who would want to roll up and play a Hunter from Troos when another player could get lucky with a Melnibonean Sorceror?

Here again the struggle makes it work. Whereas the game rules largely center on the powers given to Agents or Champions, there are also serious drawbacks:

1 Agents are always targeted by the opposition, companions are often ignored.

2 Agents cannot refuse the call of their faction, companions may come and go as they please.

By following these two tenets, a new game style also comes into view, akin to Ars Magica, where Agents are the Champion of the story and others are a rotating cast of Companions. Each player could create multiple PCs and rotate them as the story demands.

And that is exactly what any game based on the Elric or Eternal Champion books needs to do.

Posted by Tedankhamen at 9:01 AM