THE WHIFF FACTOR vs ATTRITION

Stormbringer and all BRP games sometimes have a problem with the whiff factor - two or more combatants all swinging away at each other and missing or failing to do damage. "So does D&D!" you might say. Fair enough, but add in defences like Parry and armor and BRP combats can become long, drawn-out affairs.

One simple idea I have had to solve this is adding the concept of Attrition, or whittling down of energy or strength. Combat is long and gruelling, as anyone with experience will tell you. When I fought in karate tournaments in Japan, the 3 minute rounds felt like an eternity. Anyone below brownbelt was a gasping, wheezing, wobbly-legged bucket of sweat by the end of one. Even blackbelts felt the toll, but were both more conditioned to handle it and were better at conserving energy.

You see this in Moorcock's works - Elric is so exhausted after the first battle with Young Kingdom raiders, Yrkoon takes the opportunity to throw him off the golden battle barge. Similarly, he is also drained after the fight with Belbane, the Mist Giant. Here is a proposal to simulate this and speed up the result of combat. 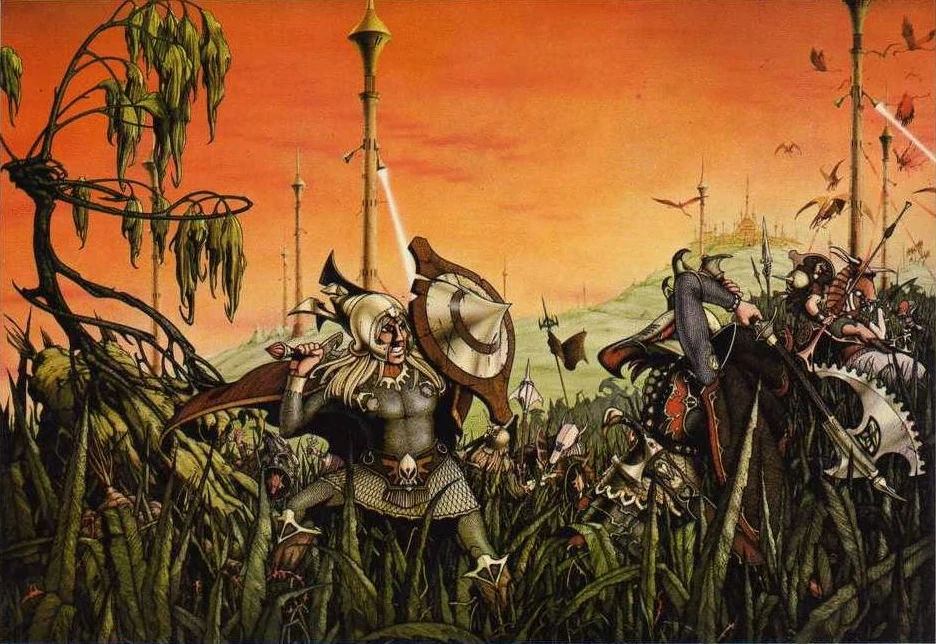 First, since this adds to bookkeeping, it should only be used when a combat is already dragging on but a resolution of some sort is required. Both GM and players should agree on the use of Attrition to end the combat. In this light, Attrition is mostly useful in duels or small skirmishes, such as when Hawkmoon and Baron Meliadus both collapse during their fight at Hamadan in The Jewel in the Skull.

For each round that the combatants whiff (ie fail to hit or do damage to one another), both receive a point of Attrition. Ideally, I would use STR as the pool, as Elric often mentions his lack of strength. But to reduce bookkeeping, a GM could use HP and consider Attrition as temporary damage healed after a short rest.

When a character reaches zero, they can no longer attack, but only defend. The GM should remind them there are other options to fighting (fleeing, surrendering, or playing dead). If the fight continues out of stubborness, a character who reaches negative in STR (or CON if using Hit Points for Attrition) collapses and is unconscious for 1d100 minutes.

The GM may rule that any standard healing potion negates attrition, but cannot be imbibed while fighting (this is not an MMORPG)

Resting nets you the following recovery

1 point per quarter hour sleeping after the fight

1 point per half hour spent resting after the fight

1 point per hour spent walking after the fight

Note that losing consciousness to attrition should not always lead to death. See my blogpost on replacing death with story effects HERE.

On the FB page for Elric / Strombringer, some fine people suggested fixes even better than my Attrition rule. One poster related that he or she adds 5% to attack skills of combatants for every round they whiff. This is easier to track than Attrition (STR or CON) and increases the probability of a critical that decisively ends things. I'm running a game on Discord this weekend (DM me if you want in) and I think I'll throw the option to players.