Seeing the Forest and the Trees in RPG Design

I've been dipping my toes in Twitter, as this seems to be where RPG discourse is most alive. Blog posts only seem to get offers for penile enhancement or surefire investments these days.

Anyway, there was a call for inspiration in making a scenario, and the answers laid bare what I think is the problem in RPG design. Here is the question:

Q: What are the essentials for a great Star Wars adventure? (I need to get writing)

OK, nothing new here. Just a fellow gamer looking for some inspiration. Here are the first two responses:

OK, again, nothing new here. These are all what we'd call tropes, or easily identifiable, genre specific cues. Could be a character, an event, a locale. These are great suggestions, and just what the doctor ordered.

But there is a problem with just relying on tropes, and it is threefold.

First, if we just set up a string of set pieces, we run the risk of a railroad, or rail shooter experience. The GM will set up when the plans are to be handed over, what type of shady bar they'll do the handover in, and just when the violence should start. One character decision is enough to derail the adventure, frustrating the GM and destroying the illusion of player agency.

Second, when using Intellectual Property (IP) especially, there is a danger of what I call "IP Tourism." As you know I am a big Stormbringer fan, and there is always the tendency for GMs to stick with known locales like Imrryr and Tanelorn, while players always want to get the selfie with Elric (usually while being eviscerated by Stormbringer). As the Breakfast in the Ruins podcasters note, a true Moorcock gaming experience would be on some random, unknown world of the multiverse, not just traipsing through locales from the novels. Considering that the Star Wars universe has literally an unlimited number of planets, the fact that no less than 5 movies have visited Tatooine implies that filmmakers themselves have trouble with this aspect of IPs.

Last, if we just recycle tropes all the time, we are doing nothing new or exciting, and interest will eventually wane. Look at the films - the original trilogy was chock-a-block with new or innovative storytelling and visuals (much expertly recrafted from other genres - such as the Death Star canyon run being lifted from 1954's The Dam Busters). But by The Force Awakens, the storytelling was so laden with tropes that not much new was being done.

My answer was this: Fascism, inequality, tech, exotic locales, and hope.

I don't think my answer was better than the other two, it just completed their list of the tropes with a reminder of the over-arching themes behind them. The violence in Star Wars is born from the struggle against fascism; the hegemony of the fascists creates inequality throughout the system, which even colours the use of tech (ie droids are nothing more than created slaves), and shows that, sadly, technology won't save us from man's inhumanity to man. The exotic locales are born from this struggle as well  - rebel bases hidden in jungles, pod racers in desert planets that could be turned lush and green if the empire wasn't so busy making Death Stars. 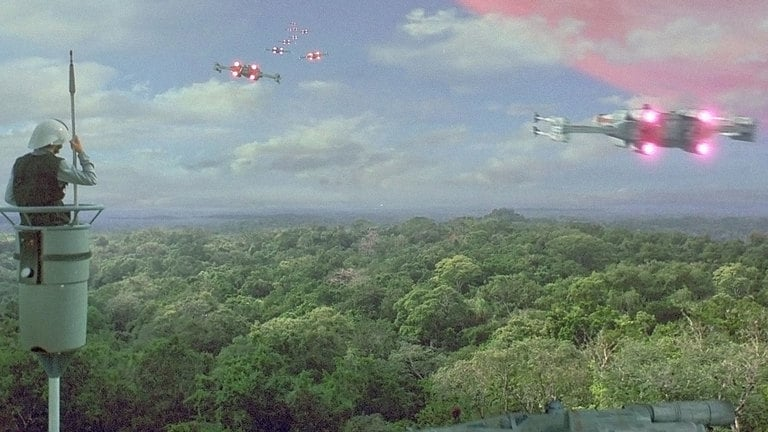 NB: My two favorite 'new' SW films are Rogue One and The Last Jedi. The former leans heavily into tropes (fleet battles, stolen plans) while keeping the theme (the Resistance cares about the mission, not the many Bothians who die for it) front and center. The Last Jedi also has tropes galore, but the revelation that the universe, despite being a place of high technology and radical inter-species diversity, is held back by its endless conflicts, is summed up in the words of Benicio Del Toro's character, DJ: "They blow you up today, you can blow them up tomorrow" Whatever faults these films have, at least they succeed in balancing the forest and the trees of their imagined universe.

When you design an adventure, you have to see not only the trees (ie the nitty gritty tropes that help you imagine the world), you also have to keep in mind the forest (ie the themes that drive the characters in the gameworld, and that make players care about it) . Focusing on only one level of the game - tropes or themes - is ultimately unsatisfying for players and GMs alike.

Posted by Tedankhamen at 1:03 AM